by Steven Johnson
published: 12 May 2011 in Live Music Reviews
Tweet 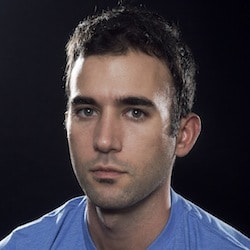 Last week saw the mercurial Sufjan Stevens return to the UK to play a handful of highly anticipated shows, his first in this country since 2006. Last year’s The Age Of Adz album had provoked a mixed reaction from fans and critics, some lauding the brave, adventurous change of direction, others lamenting the dearth of his trademark guitar based songcraft. This pair of shows at the Royal Festival Hall saw him draw heavily on this new material for his two and a half hour set. Support came from labelmate DM Stith who played a short acoustic set before returning to the stage later as part of Stevens’ ten piece band.

The show began in darkness with Seven Swans, opening in quiet acoustic fashion before exploding into life and volume. The song also provided the first glimpse of his continued sense of theatre, the band being dressed in fluorescent patterned outfits and Stevens sporting a pair of large white wings. A screen that periodically dropped down from the ceiling to provide a 3D light show ensured an impressive visual spectacle, supplemented by video projections and neon décor.

Too Much saw guitars pushed to the fore and a slight toning down of the electronics of the recorded version. The strings were also omitted, unfortunate in some ways as these were one of the stronger aspects of the album. The Age Of Adz, introduced as “a love song to the apocalypse”, continued in similar vein. Various layers of the album version were stripped out, leaving burgeoning trombones and surging guitars.

The three songs played from the All Delighted People EP provided a small change in mood. Heirloom and Enchanting Ghost were faithfully reproduced and a tender, pretty version of The Owl And The Tanager played by Stevens on piano, alone on stage. For the second night he dropped the latter in favour of Now That I’m Older from The Age Of Adz.

Surprisingly, one of the weaknesses of the show were Stevens’ attempts at communication with the audience. At one point he indulged in a lengthy speech on the origins of the album, and also on one of his key inspirations, outsider artist Royal Robertson. It sounded like a justification for the nature of the set, although during the second show he curtailed it and suggested it was simply an attempt to contextualise the album.

Indeed, he talked about the music extensively throughout both shows, at various stages calling it “self-interested”, “solipsistic” and “process music”. He spoke about his decision to move away from “cerebral music” to sounds that engage the body and focus on beats. Stevens accordingly showcased some of his new dance moves, to mixed results (occasionally even eliciting unintended laughter from some in the crowd).

Synthesisers, bass and percussion made up much of the sound of I Walked, Get Real Get Right and I Want To Be Well. To close the main set Impossible Soul was successfully reinvented as a high energy, day-glo, strobe-lit, science fiction tinted opus, brimming with positivity and colour. Stevens shed any remaining sense of self-consciousness, continuously moving around the stage and undergoing three costume changes along the way. He ended by delivering some of the vocals whilst standing on top of the piano. It was a marked improvement on the slightly unfocused, drifting version that closed the album and it inspired the audience to gather at the front of the stage, dancing in celebration.

He returned to familiar ground for the encore, which featured a sublime trio from Come On Feel The Illinoise – Concerning The UFO Sighting Near Highland Illinois, John Wayne Gacy Jr and a euphoric Chicago, complete with coloured balloons raining down from the ceiling (Casimir Pulaski Day replaced John Wayne Gacy Jr for the second night).

These shows undoubtedly reflected Stevens’ current attitude to creating music and his propensity for regeneration as both an artist and performer. To see how long he can keep doing it for and in which direction he next heads will be fascinating.