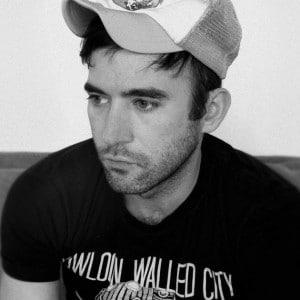 Although his once prolific work rate has calmed considerably, Sufjan Stevens remains the most restless of artists. Inspired by the death of his mother, Stevens revisited childhood memories with a combination of nostalgia and gut wrenching intimacy on his recent masterpiece Carrie & Lowell. How to bring such a vulnerable and exposed project to the live arena, where proximity between artist and audience can be hard to achieve?

Perhaps the first cause for concern on Stevens’ current tour is the fact that there are often five musicians on stage (sometimes expanded to six tonight given the presence of composer and arranger Nico Muhly). This is more players than might seem necessary to bring the vivid confessionals of Carrie & Lowell to life. Whilst the album proved that less can often be more for a hyperactive creator such as Stevens, the expansive show suggests that the Stevens that made the cluttered, overbearing Age Of Adz album is never far away.

The performance starts brilliantly, with amber lights gradually rising against a swell of atmospheric synth noise and cleverly arranged home video footage on the screen (filtered through what appears to be a stained glass window effect). For a while, it seems as if Stevens plans to deliver Carrie & Lowell in sequence, and the opening Death With Dignity is delivered faithfully – brilliantly combining compassion and warmth with a stark austerity. Stevens’ melodies on Carrie & Lowell are deceptively simple, sounding almost nursery rhyme-like while taking on unexpected shifts and flights of imagination. Stevens mostly plays acoustic guitar, but has a laptop and synthesizer to his right. The delicate electronic patter that concludes the rueful I Should Have Known Better is expanded and enhanced in performance as a result. From here, he does rearrange the album’s sequence, but only slightly.

Indeed, all the album’s subtle interventions of grandeur or digital manipulation are amplified hugely. Sometimes this works peculiarly well. Few in the audience could have predicted that All Of Me Wants All Of You would evolve from half time sensual R&B into a ’70s fusion epic, complete with a lengthy pitch bended synth solo. On paper, this sounds like a tasteless disaster – but it’s hard not to admire Stevens’ irreverent chutzpah in attempting it, and the song retains a genuine power. Other songs are played relatively straight – clearly, songs as devastatingly honest and unflinching as The Only Thing and Eugene need few, if any, embellishments. Even these moments are tonight slightly deflated by the occasional vocal phrase delivered weirdly off-key.

Far less successful are other examples of the arrangements being fleshed out for a live band. The beautiful John My Beloved and Fourth Of July both crescendo unnecessarily into a somewhat laboured quasi-orchestral stomp, complete with big crash cymbals emphasising every first beat of the bar. Indeed, much of the second half of the album is given these sort of extended, evolved arrangements, some of which only serve to neuter the otherwise palpable raw emotion in the songs.

The ‘we’re all gonna die’ chant at the end of Fourth Of July, perhaps devastated or resigned in the recorded version, now sounds curiously triumphant. A peculiar feeling of detachment is further created by Stevens’ decision to segue a number of the songs with banal synth pads and drones and to eschew any attempt to address the audience until the end of the main set. This feels like an effort to assert a new status for Carrie & Lowell as a singular work of art, a pop symphony rather than a set of interlinked powerful songs, when it actually works much better as the latter. The closing Blue Bucket Of Gold is protracted almost interminably with wild, droning noise, supported by Muhly on the venue’s wonderful organ. In conjunction with the very impressive lighting, this does create a sense of finality and redemption that is appropriate for the album’s themes.

The only songs in the main set not drawn from Carrie & Lowell are Vesuvius from The Age Of Adz and The Owl And The Tanager from the All Delighted People EP. The former remains frustratingly cluttered, although it at least has the benefit of exuberance and energy. The Owl And The Tanager is a fascinating, compelling song, although melodramatic – a sort of excessive cousin to the material from Carrie & Lowell. There’s a sense that Stevens has attempted to tie these seemingly disparate threads of his career together with this set, with somewhat mixed results.

The encore, however, immediately dispels any sense that Stevens has become pompous or indulgent. He seems genuinely humble and delighted to be performing in London again. The encore also revisits some of the very finest moments in his brilliant catalogue. There are skeletal but commanding versions of That Dress Looks Nice On You and To Be Alone With You (where the wonderful Dawn Landes is given space to shine) and a majestic John Wayne Gacy Jr.

The latter truly is one of the best songs of the last 20 years – a towering balance of chilling empathy and heartbreaking loss. Even better tonight, though, is the closing, wistful take on Chicago, which is delicate and nostalgic in the best possible way. Throughout the encore, drums, piano, keyboards and lead guitar are integrated subtly and imaginatively, further highlighting some of the curious choices in the main set.

Overall, a feeling lingers of Stevens as a visionary artist capable of near-genius, but with a wayward tendency and a desire to include as many ideas as possible. Sometimes he pulls this off with aplomb, but at others, he risks obliterating the fragility and beauty of his simple, brave and direct songs.