by Alex Jeffery
published: 12 May 2015 in Live Music Reviews
Tweet 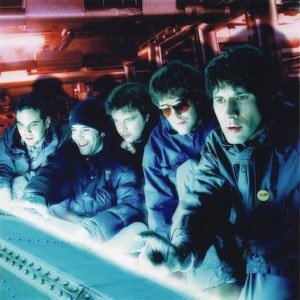 Opening with a slew of their (now) classic singles this show, the climax of a comeback week of Super Furry Animals gigs, then veered into a section showcasing the promotional focus of the tour: a 15th anniversary reissue of their long out-of-print Welsh language album, Mwng. Ymaelodi â’r Ymylon is possibly the catchiest song you want-to-sing-along-to-but-you-can’t-because-it’s-in-bloody-Welsh. However, the following suite of songs from Mwng managed to hold the interest of an audience who seemed to know the words to pretty much everything else and deserved their place.

Mwng aside, though, this was a SFA greatest moments show. A giddy onslaught of crowd pleasing songs, projections, lasers and (sparingly used) costumes (absent from the more pared-down tours for their last two albums) were all present here in what was essentially retrospective; a reminder that, while they never achieved the pop fame of many of their Britpop era contemporaries, their legacy is now assured and can be revisited as and when in enviably casual fashion, without the hype and ceremony of, say, a Pulp or Blur reunion. There may be a few bald heads now present within the band, but they were artfully arranged on stage in rear battalion, flanked by two younger brass players, magnifying the impact of the band’s more epic numbers and Stax-ing up encore, Fire In My Heart.

As the show progressed, it became apparent that these longer songs, which generally open and close the albums, are the real cornerstones of a Super Furry live performance: Run! Christian Run!, Slow Life, Zoom!, were tonight exercised with such perfect dynamics, you would scarcely know they hadn’t toured for six years. Added to these was a very welcome workout for Mwng’s most epic (and ‘emotional’) moment Gwreiddiau Dwfn/Mawrth Oer Ar y Blaned Neifion, coalescing exquisitely into its Neu-esque motorik climax. That the band possess the knowledge of a hundred different ways to wig out is hardly news to those who follow them; tonight’s mammoth 26-song showcase proved definitively that the band are experts at sculpting these powers over long sets that maintain the crowd’s energies in ways few other bands can.

Finally, after a dark week in British politics, the show predictably closed with their most politically engaged numbers, Mountain People and traditional encore The Man Don’t Give A Fuck. Despite a monologue from ever-laconic Gruff Rhys (the longest of the night, yet typically few in words) any sense of collectively felt anti-establishment ire failed to penetrate through the celebration and wonder. Don’t Give A Fuck’s initial rage has long since morphed into a celebratory rave that binds the audience in different, less angry ways. Yet this is really what we look to them for, and what made their return both welcome and extremely timely. After a political shitpocalpyse of a week, the SFAs were here to return our faith in human nature with warmth and the freedom of expression that is their hallmark.