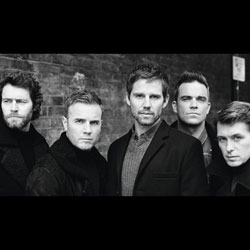 In the end, it’s a surprise that they let the will they/won’t they/please-just-hurry-up-and-do-it reunion with Robbie Williams drag on so long. Take That’s long-gestated comeback as a five-piece is one of the hottest tickets in town, and after two and a half hours of wall-to-wall hits, bonkers set design and 85,000 fans screaming in unison, you wonder what either side were holding out for – it’s so impressive, so much fun that it puts anything they’ve all achieved up until now in the shade.

The bare statistics are impressive enough. One million tickets sold in 24 hours. Nearly two million sold overall. The biggest tour of all time in the UK. Demand so high it crashed every major ticket site and created serious strain on the country’s telephone network. Profits equal to the gross domestic product of a small African country. A record-breaking eight sell-out nights at Wembley Stadium.

But it’s the human scale that is really mind-boggling. In the words of a now defunct tabloid, all human life is here – thousands and thousands of men and women, young and old. Thirtysomethings who’d grown up adoring the original five-piece, parents who’d sighed in dismay while their offspring mooned over Our Price single covers, dutiful boyfriends, gay couples, teenagers who weren’t even born when Robbie quit. It’s a curiously quasi-patriotic event, a shared outpouring of deep, unconditional love for a bunch of getting-on-for-middle-aged men singing songs so ingrained in the public consciousness they could have handed out microphones at the beginning and put their feet up. And it is, of course, quite brilliant.

The concert is neatly split into three parts – the four-piece (sans Robbie) come on and do some of their mature, uplifting pop to get the audience warmed up. Robbie then comes on and does a greatest hits set, lapping up the attention of the by-now near hysterical crowd, before, as the sun sets, the reunited group bash through a set of new album tracks (enthusiastic cheering) and old hits (near riots). It’s a mark of how incredibly, one-of-a-kind successful the members of the group have been in all their guises that the attention, energy and volume of the crowd never wavers – every song, from the opening operatics of Rule The World through the brash Rock DJ and into the glorious, innocent pop of Pray is treated like that one song everyone’s been waiting for all night.

It does become pretty clear that each of the Take That members have settled quite nicely into their roles, and while some of the onstage banter feels pretty rehearsed, there’s a comfort in the band that exudes a warm, reassuring hug to their audience. Gary’s the head boy. Jason and Howard are the scruffy dancing ones. Mark’s the cute one. And Robbie… well, it becomes apparent as soon as his mug is plastered all over the jumbotron screens and the audience screams in delight that Robbie is the rock star – an incredibly charismatic performer, all rubbery limbs and knowing pouts into the cameras. Perhaps it was part of his contract that he got 20 minutes alone to show off – and he does, in all his preening, ego-running-riot glory. He must have missed this – and it feels like a homecoming for him after years in the wilderness, a Triumph of The Will-iams, if you like.

There’s game attempt to impose some kind of theatrical narrative over the top of the show. After a relatively tame circus-themed Alice In Wonderland gone mad vibe, some Shaolin Monks climb a waterfall to introduce a giant, squatting post-apocalyptic robot into the mix. From then on in it’s flamethrowers, dancers and LED light jackets a go-go until, by the climactic Never Forget, you’re not sure what else they can possibly do to out-frazzle your already burnt retinas. And then the robot stands up. If it sounds OTT it is – and gloriously so. It’s nonsense, but, God, what beautiful, insane nonsense it is.

And the music – well, it barely matters. But, with the exception of one or two ones from the newest record, everything is so perfectly formed that it’s tough to find fault. For whatever naysayers pout, the bedrock of the band has been their ability to churn out life-affirming pop with hooks like barbed wire. It would be nice to see them really mine the back catalogue and see how Take That and Party stands up against A Million Love Songs 20 years down the line (a snatch is included in a jokey bit of who-sacked-who banter), but even Relight My Fire, with its camp sadomasochism-lite stylings, sounds modern and vital. The reunited band might not be Back For Good, but it feels that they’ve achieved a sense of closure with their adoring fans, and, it seems, themselves.

Take That MP3s or CDs

Take That on Spotify