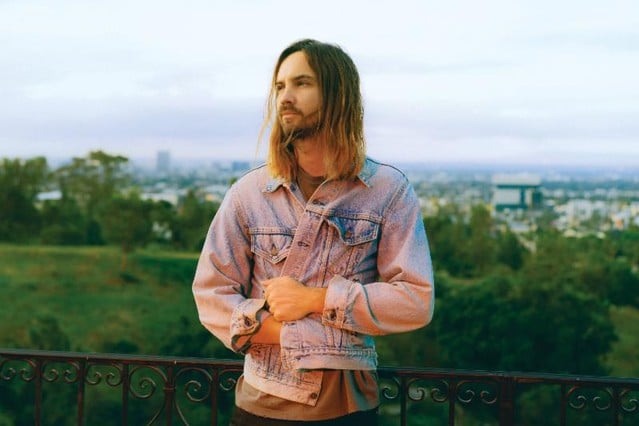 Tame Impala’s journey from a band in thrall to mid-period Beatlesy guitar psychedelia to one playing emotion-baring, electronically bolstered stadium rock has been striking. While second album Lonerism certainly pointed them in the right direction for success it was the release of Currents in 2015 that began the process that would propel them towards arena shows like tonight’s at the O2. It makes up most of the set and confirms that arenas like this are very much where frontman Kevin Parker’s music belongs. He may be backed by a band (fellow Australians Pond) but tonight is further proof that Tame Impala is effectively a Parker solo project expanded in glorious fashion (his face is regularly projected on to the kaleidoscopically colourful backdrop tonight).

They come on stage, naturally, to Let It Happen, still the perfect summary of where Parker is musically. It fizzes and sparkles and immediately ignites the expectant crowd. Confetti cannons are discharged at precisely the right moment as the supremely addictive outplaying melody begins. It offers up one of those rare moments – when a stadium sized crowd sings along in unison to a tune rather than lyrics.

Patience might have only been released earlier this year but the opening Balearic piano notes elicit high-pitched screams. It provides tantalising hints of the direction where the next Tame Impala album could head. As Parker sings of how he’s “growing up in stages, living life in phases” we get a reminder of how disarmingly honest and open he is as a vocalist. It’s undoubtedly part of the reason why he’s now greeted by thousands of fans so affectionately.

Another endearing theme entwined in his lyrics is that of male vulnerability. Eventually is a veritable aural comfort blanket, that the crowd sing along to in touching style. It’s his most heartfelt emotional opus to date and Yes, I’m Changing sees him examine his feelings furthermore. On paper, projecting personal introspection out into huge spaces shouldn’t really work but tonight Parker makes it feel like most normal, natural thing. He could yet become something of a figurehead for male emotional openness and honesty.

The psych-funk-lite of The Less I Know The Better is rapturously received, Parker recounting the story of how his girlfriend leaves him for a guy called Trevor. “Don’t suppose we could convince your lover to change his mind?” he pleads forlornly and politely. Nangs offers a short ambient break while during Gossip the band leave the stage and allow the imposing ring of lights that hovers above them throughout to manoeuvre like a UFO coming down to land.

Tracks from Currents also show how Parker expertly appropriates elements of electronic music; crescendos are perfectly constructed, textures intelligently formulated and production values are razor sharp. They dip into Lonerism for the stretched guitar riffs of Mind Mischief while Elephant is all pure glam rock stomp. They go even further back for It Is Not Meant To Be from their debut album Innerspeaker. It’s a joy to hear but also serves to show how far they have progressed musically. The neon-splashed Feels Like We Only Go Backwards delivers one last high before Parker promises to return soon with new songs – with his music as enduring as ever and shows as joyous as this it can’t happen quickly enough.