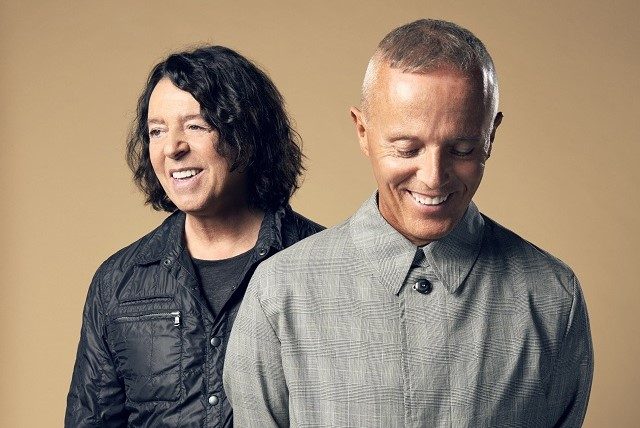 “I googled it”, Roland Orzabal had to admit when discussing how long it had been since Tears For Fears last played Brighton. “36 years…36 years…” he repeated incredulously, “like when Curt and I were five.” Jokes aside, tell us about it, pal.

There’s a certain generation that was not quite old enough to go gigging back in 1983 (the tour took in Brighton Dome according to tour programmes) when the supreme Arthur Janov inspired debut album The Hurting arrived with all its childhood pain. The stadium rock-aiming Songs From The Big Chair followed in 1985 and it’s difficult to know why Brighton would have been left out at this time – if it was at all, memories fade after all. But with the US being firmly conquered by the new, massive anthemic sound it’s no wonder that the States went on to fare much better during not just that tour but going forward also.

Supporting the duo was another 1980s icon, Alison Moyet, who, conversely, is no such stranger to the city having “moved here seven years ago”.

Opening her set with the atmospheric I Germinate – the first of three performances from her last album Other (2017) that also included the spy thriller-like Beautiful Gun and pro-LGBT song The Rarest Birds – ‘Alf’ hit her stride early. Her 80s heyday was also revisited via debut solo single Love Resurrection which followed the earlier All Cried Out. The inclusion of four Yazoo songs, the band she shared with ex-Depeche Mode star Vince Clarke, were the most enthusiastically welcomed, though. Nobody’s Diary, “written when I was 16”, she proudly announced, preceded Situation before their finest moment Only You arrived, but that was trumped by closer Don’t Go that prompted the most audience movement.

It has to be a pretty unique way of taking the stage, but Tears For Fears then came on to the sound of Lorde’s cover version of their own Everybody Wants To Rule The World, the original then belted out accordingly. Secret World continued the global theme as Curt Smith picked up his bass guitar before their 1989 top five effort Sowing The Seeds Of Love appeared.

Most striking throughout the whole gig, though, was Orzabal’s facial expressions. From a distance, Orzabal has always appeared incredibly serious, the moody and angry one as opposed to Smith’s quiet and withdrawn nature. So it was surprisingly uplifting to see such fun and humour on display, all the more admirable and endearing considering the tumultuous few years he’s been through that included the devastating loss of his wife Caroline.

Second single Pale Shelter followed, and after 1993’s Break It Down Again, the softly spoken Smith took the mic, announcing that they would now like to do some [more] songs from The Hurting. An excellent rendition of Change was quickly followed by the synth classic Mad World, a song Orzabal initially wrote on his acoustic guitar as an attempt to rival Duran Duran’s Girls On Film. Memories Fade and then Suffer The Children completed the four-in-a-row, the latter given a beautiful overhaul courtesy of backing vocalist Carina Round, having been a song largely overlooked from live performances since the mid-80’s. Round’s contribution then continued strongly into the next track, the superb oft-encore occupying Woman In Chains.

An indulgent yet compelling version of Bad Man’s Song followed, including a guitar solo that saw Orzabal lose himself within the music whilst circumnavigating the stage before declaring “what the fuck happened there?”. Then those spine-tingling opening piano chords from Head Over Heels rang out whose effect they had in the film Donnie Darko is lost due to Gary Jules’ Mad World cover within the same film, the song nicely finished off by the segueing Broken before the band left the stage.

As time remaining presumably ruled out regularly performed Radiohead cover Creep, they returned for just the one encore, Shout, where the supporting lightshow came into its own. And then, after more smiles and waves, they were gone, hopefully not for another 36 years, though.

The long wait was agonisingly lengthened by the initial tour postponement due to unspecified health problems but it would be selfish and inconsiderate to complain in light of recent events. While time is starting to take its toll on Orzabal’s vocals – let’s face it, they were always abnormally super-strong anyway – Smith’s now hold their own better than in the early years when they were dwarfed by his partner’s sheer power, and, coupled with Round’s sterling contribution, a thrilling vocal equilibrium is now maintained throughout 90 minutes. June will see the band play two shows at nearby Hampton Court Palace, but if it is the last time they play here, though, then it’s a fitting climax. After all, everybody loves a happy ending, don’t they?