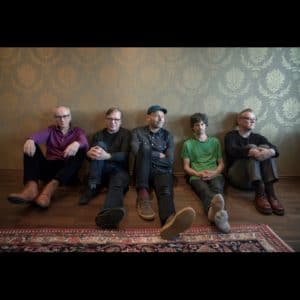 Teenage Fanclub (Norman Blake, Gerry Love & Raymond McGinley) are one of a small handful of guitar bands that have survived the ’90s and are still thriving in this new century. Regular as clockwork, they release an album every two years, tour – and then disappear. This is not the sort of band you are likely to read about in the tabloids. They are about music and nothing else. And what damn fine music it is.

The sheer number of excited faces crammed into The Limelight was testament to the appeal Teenage Fanclub – affectionately nicknamed The Fannies – still hold. Opening with the slacker classic Everything flows, the crowd gleefully sang along, hands rose into the air, hips swayed and bums wiggled. Unfortunately sound problems plagued the band for much of the night. This did noticeably irritate them – and us – at times, but they still looked relaxed and happy with their warm reception.

Playing mainly songs from their recent best-of collection, the setlist was a journey through the highlights of their career. Personally, the song of the night was What You Do To Me, which originally featured on their breakthrough Bandwagonesque album. I’d never been particularly keen on this track until hearing it live. It was quite simply three minutes of the finest pop music I have heard in years! Punchy and even a little punky, it seemed to please a lot of the older fans. The three new songs (one by each member of course) were also played to moderate applause, but as these tracks had only been released four days earlier, it seemed most of the audience were not yet familiar with them.

After a five-minute break, they once again took to the stage, and following a rather lacklustre version of Planets by McGinley, they played probably their most famous tracks – Sparky’s Dream and the timeless The Concept. The former sounded as beautiful and joyous as ever and for me immediately brought back memories of the mid-’90s and their most successful album Grand Prix. Then came The Concept. Simply breathtaking. An awe-inspiring nugget of pure joyous melody. We sang, we swooned, we swayed and we saluted.

I get the impression this band is here to stay. They are not going to disappear with the next music trend, nor will they implode in scenes of rock’n’roll debauchery. They will be around for years, quietly ploughing out melodic nuggets of pop – and for that we love them!