by Helen Clarke
published: 14 May 2013 in Live Music Reviews
Tweet 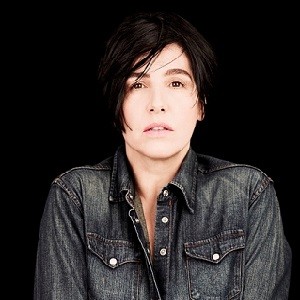 Think of Texas and you’re surely transported back to long summers of mid-’90s commercial radio; safe, warm and cosy ‘mum rock’. Texas were popular in a Radio 2 kind of way, selling more than 30 million records. But cool? Texas were never cool. Until tonight.

After an eight year break Sharleen Spiteri and co are back with their eighth album and, as a testament to their long standing, loyal fan base, they’ll be marking the end of their 25th year as a band with a tour that’s set to take in the likes of Hammersmith Apollo in November. For tonight though, it’s the sweaty basement of The 100 Club; and Spiteri seems thrilled by it all.

The crowd consists largely of invited guests, with pockets of hardcore fans, and Spiteri spends much of the gig waving at people and laughing at requests for songs from the dusty nooks of their back catalogue. Tonight is principally about their forthcoming album, The Conversation, which is out next week, but they rotate those songs with old favourites. They open with Detroit City, one of the new album’s more predictable, anthemic tracks, but they really come to life with Halo, which sits with the likes of Here Comes The Summer Sun, When We Are Together, Black Eyed Boy and Say What You Want in creating an appreciative mosh pit of sorts.

Beaming out at the crowd, Spiteri is a natural front woman, regardless of the lengthy hiatus; relaxed, full of chatter and hugely entertaining. Despite long being a matriarch of the Primrose Hill set, her thick Scottish accent looms, as she curls out expletive-ridden greetings: “Are you fucking ready, London?” And it doesn’t stop there. “Scottish whisky of course. Don’t be a pussy your whole life!” she laughs, placing a drinks order with a member of the audience before complimenting the dancing of some lively sorts at the back; “You’re dancing like motherfuckers” and musing on how much she’s enjoying being back with her band, or “cheeky fucking bastards”, as she calls them.

She might be endearingly potty-mouthed inbetween tracks, but when that same mouth sings, it’s something to behold. Note perfect on renditions of the old tracks, she layers on a more prominent country twang for the new ones. Big World and Dry Your Eyes, which we’re told was written with Richard Hawley – who also produced much of the album – are highlights. Hawley’s whisky-soaked, rock ‘n’ roll seeps through, but rather than a conscious departure from the Texas of yore, the new tracks sound more like a stunted, natural progression; they suit her voice perfectly.

An encore of I Don’t Want A Lover and a brilliantly raucous version of River Deep Mountain High round things off, with Spiteri taking a moment to be sincere: “It’s so fucking good to be playing music again. What’ve we been doing for the last eight years?”

Later this year they’ve got a big tour of theatres and city halls, tomorrow night they’re recording Later… with Jools Holland and next week their album will undoubtedly be slipped into suburban supermarket trollies up and down the country. But tonight, as the crowd heaves out of the West End basement, drenched in beer and sweat, Texas seemed cool. Really fucking cool.