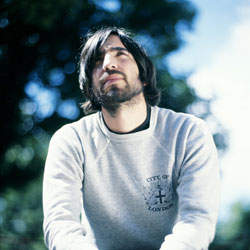 Now 12 years old, The Album Leaf have ploughed a remarkably consistent furrow since Jamie LaValle first created his ‘musical project’ in 1998. He’s arguably one of the inventors of the amorphous genre known by the super-vague moniker “post-rock”. This date was the last of their European tour to promote new album A Chorus Of Storytellers.

The oddball opulence of Bush Hall suited the lushness of The Album Leaf’s dense indie ambience. Beginning with a slew of songs from A Chorus of Storytellers, the expert surge and billow of the music spread a warm glow over the room, helped by the film projections that spilled out from the back wall and across other surfaces.

Bleached out footage of kids playing perfectly fitted the spooky drone of the opening moments of Perro, leavened – as throughout the set – by the presence of a string quartet. Musicians were positioned unassumingly towards the back of the stage, though they vied for self-effacement with members of The Album Leaf. As befits an erstwhile side project turned sprawling musical adventure, The Album Leaf don’t make much fuss about themselves. The film projections took the place of any attempt to interact meaningfully with the crowd, although the music did a good enough job of that. Lit by motes of coloured light, the shadowy musicians onstage produced a sound that was just as multilayered, rich and swirling – like a Viennese roll – as you’d expect from having eight people onstage.

Occasionally someone would whip out a shaker and shake it enthusiastically, but otherwise this was a serious business. “We come so close but we just miss,” lamented LaValle during Falling From The Sun, which thankfully didn’t describe the song. It layered creature-under-the-bed beats (muffled, insistent) with a meltingly sweet vocal. The next song, Stand Still, brought a welcome sharpness, with the ironic counterpoint of some quite dizzying projected footage of spinning fairground lights. The dense sound plus the film plus the extra touch of a mirrorball added to the venue itself, made it almost impossible not to be swept away, but perhaps it was all too urgently, efficiently epic.

It was a relief when LaValle piped up with some adorably mundane observations. This was the last night of their European tour, and it was nice to be in London, and thank you for selling out the show. He ran out of small talk and threw in the first oldie of the night, Twentytwofourteen from the 2004 album In A Safe Place. It’s something like the soundtrack to an American indie film about people whose disastrous lives miraculously right themselves when they meet each other, and it got a deservedly warm reception. They followed with a couple more forays into their back catalogue before rejoining A Chorus Of Storytellers with We Are, a song with a surprisingly pop heft and conviction, lifting the band cleanly out of the faintly shoegazey morass they can sometimes fall into.

The Album Leaf works in architectural layers and on an epic scale, and wants you to be transported. It’s tempting to cruelly paraphrase their own lyric in accusing them of coming too close but just missing. But it was more that. Over a long set, the degree of rapture inevitably came and went. They ended on Wherever I Go only to return for a generous four-song encore. If you want to squeeze fragile beauty out of a post-rock soundscape, you have to work hard for it. The Album Leaf is one hard working band.

The Album Leaf MP3s or CDs

The Album Leaf on Spotify