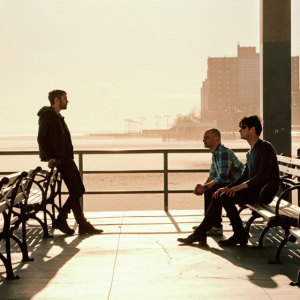 With the release of the wonderfully atmospheric Familiars earlier in 2014, Brooklyn trio The Antlers delivered perhaps their most consistent record yet, continuing the subtle evolution of their sound which marks them out as one of the most interesting bands to come out of the US in recent years.

While breakthrough release Hospice was a devastatingly bleak, introspective concept album largely focused on front man Dave Silberman’s piercing, Jeff Buckley-like vocals and starkly vivid storytelling, 2011 follow-up Burst Apart was more immediate and anthemic, featuring some huge choruses and a more robust, honed production. With Familiars, the emphasis shifted again, with melancholy horns and fluid, graceful guitar lines giving their music a newly soulful sheen. A packed Hackney Empire was keen to hear how The Antlers’ latest offering translated to the live arena, and by and large they weren’t disappointed.

The open spaces, elegant architecture and moody lighting of one of London’s more charismatic venues lent itself well to Silberman and company’s intricately textured, slowly building songs and it only took a couple of minutes before the sound of solo trumpet on opener Palace soared over the audience, like a clarion call ushering them into The Antlers’ rich sonic world.

The majority of the show focused on material from Familiars, with the first older offering, Kettering (from the largely absent Hospice) not getting an airing until the first four tracks from the group’s latest album had been played. No-one seemed to mind very much, as the quality of the musicianship on display was frequently sublime, often recalling early Pink Floyd with its huge slabs of noise punctuated by some fantastically fluent, evocative guitar work. This reached a peak mid-set with the elegantly lilting Revisited, a slow burning, near eight minute epic that starts with Silberman’s anguished vocal over rolling piano chords before his guitar guides the song home with a devastating combination of technical dexterity and emotional power. Hot on its heels comes the quietly stunning Parade; its lush, warm country-soul, with the horns at their most effective yet, recalls Lambchop at their heartbreaking, melodic best.

In contrast, the earlier songs in the show fared slightly less well. The crashing chords and defiant lyrics of I Don’t Want Love, perfectly suited to live performance, sound as captivating as ever, yet Putting The Dog To Sleep, arguably The Antlers’ most dramatic, stadium-friendly composition of all, falls strangely flat, with a slightly loose arrangement making it feel careless and perfunctory. It’s as if Silberman is already bored of his better known songs and is feeling the need to meddle with their magic, rather like Bob Dylan of later years treating bewildered fans to kitsch lounge versions of his ’60s classics.

Thankfully, the widely anticipated encore Epilogue survives this process largely intact, with the hushed keyboards and coruscating vocal capturing the shattering lyrical impact of the Hospice closer perfectly before reaching for the skies with an ear-splittingly loud climax. This is a band at the peak of their powers, as compelling live as they are on record, despite – it must be said – barely communicating with their audience at all during an hour and a half on stage. Yet one could argue that the exquisite beauty of their music; by turns hypnotic, elemental, maudlin and uplifting, says all there is to say on its own.