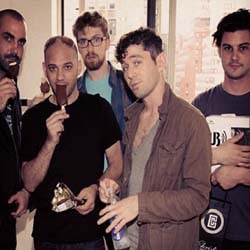 The Antlers’ front man Dave Silberman writes lyrics so bleak he makes Leonard Cohen sound like Steps by comparison. The Brooklyn band’s word of mouth success debut Hospice was a concept album about dying of cancer, while this year’s critically lauded follow-up Burst Apart focused on dysfunctional, disintegrating relationships. So while they don’t exactly conjure up a party vibe, the fact that Camden’s Koko was packed to the rafters on Thursday night for the London leg of their European tour is evidence that their hugely powerful music is connecting to an ever-increasing audience.

Faced with Koko’s cavernous wide open spaces, it’s probably not surprising that The Antlers opted for a more muscular sound live than on record, drawing out their guitar chords with layers of shimmering feedback backed by Michael Lerner’s thumping drums and Darby Cicci’s keyboard flourishes. Burst Apart saw the group follow a similar path to their most obvious influence Radiohead, by introducing electronic textures to a more conventional indie sound. But rather than taking the Kid A route towards denser, less obviously melodic compositions, the album’s songs are more of a step towards stadium rock, with echoes of Pink Floyd and Muse very apparent in their performance.

The majority of the set list was Burst Apart material, with the occasional Hospice track added in for good measure. The likes of Every Night My Teeth Are Falling Out, French Exit and Sylvia were delivered with customary passion and intensity by Silberman and his band mates. Yet a nagging doubt emerged that for all their excellence, The Antlers’ greatest strength is the cohesiveness of their albums as a single, storytelling whole. Mixed up into bite-sized chunks and shorn of some of their subtle fragility, the live experience isn’t quite as compelling.

One aspect of their appeal that remained undiminished however was Silberman’s extraordinary voice. We got a taste of its formidable range on the delicately beautiful Hounds midway through the evening, but it was at the end of the show that he really excelled, with the quartet saving their finest songs until last. Only then were we treated to a hymnal, organ-propelled rendition of Burst Apart’s epic closer Putting The Dog To Sleep, followed by an two-part encore that climaxed with the mind-blowingly good Epilogue, which substituted the sparse acoustics of the recorded version for a slowly building torrent of noise from the whole band. With Silberman’s falsetto pyrotechnics utterly mesmerising, it matched the shatteringly emotional impact of an original that is arguably The Antlers’ defining career moment to date.