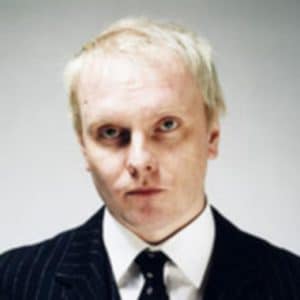 The Auteurs were not the next act on after their support band. Whistler, an intriguing mix of Beth Orton and Belle and Sebastian live, finished their set and were replaced by roadies and technicians, readying the stage for the arrival of Luke Haines and his merry band.

One of this bunch, a largesse male adorned with a slimy baseball cap and roadie standard-issue ripped black jacket and jeans, stepped up to the microphone and spoke for around three years. I feel sure that the space-time continuum was playing tricks on me – perhaps the man was only fronting the stage for 10 minutes, but even that was ten minutes too long.

Initially it seemed like this was a roadie with ideas above his station, but with tell-tale words like “bootboys” being used it became clear that this was intentional, if ad lib. The audience was polite for at least six months before beginning to shout abuse at the man, whose babbling turned to the kind of graphic descriptions of seedy sex scenes that would have made even Jarvis Cocker step back in shock. Troubled only by the intermittancy of his microphone, this desultory specimen finally completed his routine, if such it can be called, and left the stage to emphatic silence.

It was around this time that people began to ask after the huge flag that adorned The Quad’s stage. It was clearly of Arabic origin, but there was some debate amongst the audience as to which country, until the consensus settled for Iraq. Naturally, thoughts then turned to what Luke Haines was trying to do to his audience by way of warm-up.

The Auteurs finally arrived, looking for all the world like a collection of bankers, the bass player complete with a black pinstripe suit, David Ginola-esque haircut and…. trainers…, the synth/cellist opting for a grey suit and neat hairstyle, while Haines still had his peroxided barnet and black suit/tie and white shirt, looking like an angry, punky Neil Hannon before he went all casual. Momentarily, thoughts of talkative roadies and Iraqi flags were forgotten as they opened with Some Changes; but then it was Baader Meinhof time. The provoked reactions were again to be heard from the audience, as just behind me somebody decided to yell “UNSOLVED CHILD MURDER” at the band several times over. “We have a set list,” Haines replied witheringly, launching into an excellent rendition of The Rubettes.

By chopping out the dodgier numbers from Now I’m A Cowboy, Haines managed to present the work of The Auteurs as entirely great, and indeed most of it is. Consequently this show was in no way a showcase of material from current album How I Learned to Love the Bootboys, as we were to discover. Songs from every album appeared; Lenny Valentino, Unsolved Child Murder, Your Gang Our Gang (during which vague attempts at moshing were made by at least two people), Buddha (three more joined), How I Learned to Love the Bootboys, Light Aircraft On Fire and several tracks from Baader Meinhof’s album.

They came back three times, and even after that the lights stayed down and the audience continued to cheer, whistle and generally show their appreciation for the music of a man who resolutely refuses to be a pop star yet gives off every impression of already being one. The Auteurs always were a breath of fresh air, a kiss of life to the tired guitar band formula, and we remain very lucky to have them, pop stars or not.

The Auteurs MP3s or CDs

The Auteurs on Spotify