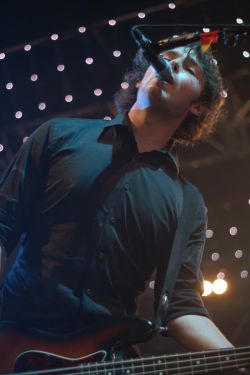 Thundercats will forever be regarded as cult genius. But if you’re going to lift the main bad guy’s name, you sure as hell better be worth it, which is where Mumm-Ra fail spectacularly. Straight out of The Kooks‘ mould with added synth for quirkiness (doesn’t everyone seem to have some these days?), they trail out a set of lazy choruses, half-baked melodies and really bad banter. The highlight was their singer knocking over his mic stand. I had been holding out for some justification of their existence. It was not forthcoming.

Having a hit single is one thing. Having a monster hit single is quite another. You risk becoming a one song band, who spend their entire time trying to get people to like other songs and dreading the “play the single” heckle, which as Aqualung found out, can be the beginning of the end. With the likes of Recover and Keep Your Eyes Peeled, The Automatic bring enough of something different to stand out from the crowd, and without having to rely on gimmicks, or the guilt of being a one hit band. Their set wasn’t filled with surprises, but they still produced an excellent set taking catchy studio sounds and giving them a good kicking on stage.

Most opted to leave after Monster, and yes it gets the biggest reaction of any song by some distance, but you have to be a fool not to appreciate the quality of the rest of their material. Bounding around the stage to You Shout You Shout You Shout, it’s hard not to be drawn by The Automatic. Then again at this point some are still slightly aghast at the penultimate song, a cover of Kanye West‘s Gold Digger, complete with flute solo. It wasn’t that is was a bad cover, it’s just that it was a pretty average cover of an average song. But onwards with the encore, they’ve still got Recover left to play.

And indeed, as they bring the three song encore to an end with their current single, I cant help but think it’s a pity that they released Monster. This has been a good gig, but not a great one, and in part it’s due to the lack of any real bond between crowd and band. I left wondering how they would have sounded in a smaller venue, without the people who left after Monster.

The Automatic MP3s or CDs

The Automatic on Spotify