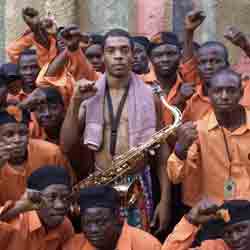 If Janelle Mone could make the rain fall yesterday then Norman Jay always makes the sun come out. But on a grey afternoon of sporadic downpours, how’s he going to manage this year? Thankfully, MBE Norman steps up to the mic, says “One, two” and the sun immediately pokes its way out from behind the clouds and drenches Eastnor Castle Deer Park in sunlight. A much-loved staple of the festival, his genre-hopping set includes a reggae cover of Wichita Lineman, soul ballads, Amy Winehouses Tears Dry On Their Own, Magnetic Man, DJ Fresh and some brilliant house tracks. The sun goes in only briefly before Jay drags it back out of hiding with a huge dubstep remix of Rock The Casbah before ending on Love For Love by Robin S.

Femi Kuti and The Positive Force ensure that the quality level doesnt dip as the brass section and backing singers dance their way onto the stage before Femi himself appears. His energetic Afrobeat demands more dancing from the crowd than it receives. He then speaks of Africas current troubles, blaming the continent’s elite for squandering resources and the cash-bloated UN’s inertia. Its a passionate set.

A complete contrast is offered by Warpaint who ply the crowd with their Cocteau Twins-styled art rock, including the beautifully melodic Majesty. They do little to further the sound of a past era but excel at that shimmering, submerged sound of shoegaze, which sees each song drenched in reverb.

Robert Plant then takes to the stage with his Band Of Joy. Overall the style is fairly middle of the road but the former Led Zeppelin mans talent and that of fellow singer Patty Griffin and his band’s musicianship cannot be denied. Plant and Griffin combine for ’80s track In The Mood, which is leant a country twang by the steel guitar accompaniment, and Please Read The Letter before Plants trademark screech finally gets unleashed, much to the crowds joy, on the 1971 Led Zeppelin track, Misty Mountain Hop.

Meanwhile on the Peoples Ear stage, King Midas Sound demonstrate their Massive Attack-style brooding beats with a dub(step) and soul influence to a small but lively audience. The stand-out comes in the form of the ultra-heavy Surround Me. Could a trip hop revival be on the cards?

As the storm clouds gather, Rodrigo y Gabriela come to the main stage to stun the crowd with their amazingly dextrous guitar playing. Their style evades classification with flamenco and Latin influences rubbing shoulders with a dozen others, but their performance is completely mesmerising. They duel and joust face-to-face holding their guitars which they pick, strum and thump, perfectly in harmony with one another. Following a particularly impressive solo track from Gabriela its a wonder that she still has any fingers left. In between songs their humble, down to earth banter with the crowd is in complete contrast to Kanye West‘s ego-flexing last night.

Back at the Peoples Ear stage, Four Tet plays old favourite Spirit Fingers which he gradually raises the tempo of before increasing the tension further by dropping a kick drum in at hyperspeed. The beauty of the plucked strings meets with the growling bass, kick and high hats. Four Tet mastermind Kieran Hebden then demonstrates his recent shift from abstract experimentalism to his embracing of the 4/4 beat as on most recent album, There Is Love In You. Despite this, Hebdens unique take on electronic music still remains intact, as demonstrated by the glistening undulating slices of synthesised strings that cut through one track until it builds to a huge, all-consuming crescendo.

Chris Cunningham then takes over the main stage. What lives inside this man’s mind doesn’t even bear thinking about when he actually allows images of children being torn apart and couples having sex then beating each other up (with every punch landed on naked skin timed perfectly with every beat) to come out of it. It certainly makes for grotesque but compulsive viewing though. Musically abstract and visually horrific, Cunninghams sound echoes long-term collaborator, Aphex Twin, at his darkest.

Older iconic material is aired, like the alien Playstation ad girl and coke-snorting alien Rubber Johnny as the small crowd stop and stare, some nodding along forcefully to the beats. It’s an experience that makes you keep checking over your shoulder and will certainly not make sleeping easy tonight. What the Robert Plant fans make of it is anybodys guess.

And therein lies the Big Chills current problem. It seems that the festival has developed an identity crisis with the original fans of leftfield, groundbreaking music that was once the Big Chills strength alienated, the kids put off by Sundays more mature artists and the older crowd put off by the heavy pop element and horrifically un-PC audiovisual work of Cunningham. Its not that the festival should limit itself to covering just one style, it never has, but it naturally used to attract an extremely diverse audience of all tastes and age groups. Now that specific demographics are being chased and targeted, the organisers have simply diluted the original festival and by trying too hard to appeal to so many disparate groups, the Big Chill has ended up becoming just another festival. A good one, but no longer a unique one.

With such a difficult financial climate and reports of festival crowds being down across the board, it will be interesting to see if the Big Chill can return to being a festival that creates trends rather than being happy to follow them.