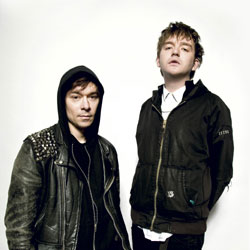 Following widespread critical acclaim for debut album A Brief History Of Love, national radio airplay for the single Dominos and a supporting slot on the Muse tour, it’s been a big few months for The Big Pink.

Certainly bigger than the venue for tonight’s gig might suggest. But the small and fairly nondescript black box that is Manchester Academy 3 is full, and there’s a shared sense of smug satisfaction in having caught this band at such relatively close quarters.

And even if it feels like The Big Pink should be playing to greater numbers, their devil-bating, stadium-swamping racket suits this type of space too. For those unfamiliar with A Brief History Of Love, The Big Pink’s sound is best described as equal parts noise and pop. Like noise-pop’s obvious pioneers, My Bloody Valentine, The Big Pink do things pretty loud. Thankfully there’s no need to hand out earplugs on the way in, but it’s the kind of destabalising thud that makes a notable impression on the chest cavity, let alone the eardrums. Too Young To Love emits from the venue’s amplifiers as a driving cloud of sonic turbulence. It’s a thunderous, lovely fug.

Accompanying the sonic storm is a dense nimbus of dry ice, so dense in fact, that it’s hard to establish whether the sledgehammer rhythms are electronic samples or organic drum beats. A drum kit and the rock industry’s prettiest (female) drummer appear through the mist as it occasionally dissipates, helping to clear up that particular mystery.

Luckily the band’s two main protagonists are easier to identify. Milo Cordell stands behind a bank of electronic gimmickry. Rarely looking up, he’s the model shoegazer. He bobs on his toes like a 6ft metronome, providing the band’s futuristic landscapes. A sleeveless Robbie Furze adds overdriven guitars and Jim Reid-esque vocals to the sonic maelstrom, reeling in the futurism and helping the band bridge the gap between techno and indie-rock.

Although hair grooming seems to have been less of a priority on this tour, the band – including a number of supporting members – look the part. There’s plenty of The Jesus And Mary Chain ’80s throwbackism and nothing feels particularly forced or contrived. The music has its own violent and graceful way of speaking for itself. Which is good, as the band, in time-honoured fashion, hardly utters a word.

During Crystal Visions, Furze is forced to break the silence in the form of a mumbled apology due to technical difficulties. But the crowd seems aware of how effects-laden the music is and the respite only serves to ratchet up the atmosphere, before the track’s climactic, head-numbing explosions satisfy the most noise-addicted cravings. Velvet, the album’s powerful centrepiece soon follows, sounding as desperate and confounded by love as it always does.

The band may have also been confused by the crowd’s slightly apathetic reception. It took the final track of the night, Dominos, to rouse the crowd into some kind of arm-raised praise. Miserable Wednesday nights in Manchester will always bring their own problems. But it’s still early days for The Big Pink. For the moment, the sound is loud and the signs are good.