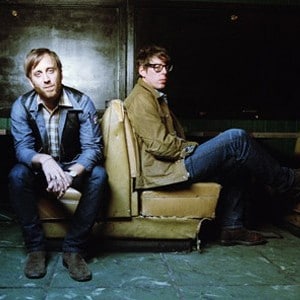 “El Camino went gold in the UK last week, so we’re going to celebrate tonight” announced a leather-clad Dan Auerbach, with a jam-packed Alexandra Palace looking on. It really is a testament to The Black Keys’ recent success that this was the first of three sold-out nights at the iconic North London venue. It has been a long slog for the duo, made up of guitarist Auerbach and drummer Patrick Carney, with widespread recognition only coming after the band’s sixth studio album, Brothers, picked up three Grammy Awards. Yet it was 2011’s El Camino that really propelled The Black Keys to international acclaim, with its sharp, 3-minute, pummelling rock tunes providing the platform for their domination of a stagnating rock genre.

Kicking off with the barbed riff and clattering drums of Howlin’ For You and the jostling, blues-infused Next Girl from Brothers, Auerbach and Carney set about wowing an audience that had earlier been treated to a mighty supporting set from Band Of Skulls. The duo’s current success was clear in the setlist, which consisted mainly of songs from the last two albums, with a smattering of their earlier material. El Camino lends itself well to the live set, with all seven songs from the album that made an appearance going down a storm with the full-capacity crowd. Songs such as the raucous Run Right Back, glam-rocker Gold On The Ceiling and the incredibly infectious Dead And Gone, all possess an enthralling energy that instantly rubbed off on the audience when played live, too.

As with Kings Of Leon‘s post-Only By The Night success, the new fans that have been acquired on recent albums were less acquainted with The Black Keys’ earlier material, with many quizzical faces meeting the heavy, muscular riff of Thickfreakness. The banter between songs from the Ohio duo was minimal, except for Auerbach thanking the crowd several times for coming out on what was a freezing cold evening. Instead, the emphasis was on turning Alexandra Palace into one massive mosh pit, breaking into the meaty trio of Girl Is On My Mind, I’ll Be Your Man and Your Touch – from Rubber Factory, The Big Come Up and Magic Potion, respectively. While the depths of The Black Keys’ catalogue were only touched upon, when they did dig out the classics they were well-received.

It was the songs from the band’s seventh studio album that really set the crowd off, though. Little Black Submarines was a particular highlight, with the slow, understated opening building up to an epic explosion of Auerbach’s crunching guitar and Carney’s seismic drumming – sending the crowd into another frenzy in the process. Clearly soaking in the atmosphere, they then burst into Money Maker with the vigour of a band exuding confidence from finally being recognised as a rock-powerhouse. As the main set reached its conclusion, Auerbach and Carney remained in fine form, with the duo breaking out the slow, drawn out Ten Cent Pistol, before the strutting rock of Tighten Up.

The pinnacle was still to come, with the adrenaline-filled, pure rock ecstasy of Lonely Boy sending the crowd into a rowdy chorus of “Oh oh oh oh, I got a love that keeps me waiting” and leaving everyone desperate for more. Sure enough, the unconventional duo returned for an encore consisting of the effervescent Everlasting Light and the squirming riff of She’s Long Gone, before closing with I Got Mine, as The Black Keys’ name flashed above them in large gold lights. It was a fitting finale to an evening that The Black Keys have been working so hard for over the last 10 years.