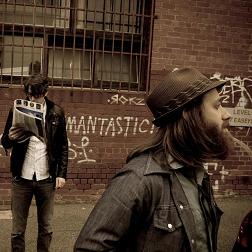 Tonight’s is a bill of spectacularly male, blues-inflected Americana coming from two bands, both approaching veteran status and both receiving what amount to career best reviews for their sixth and latest albums.

Hamilton Leithauser of The Walkmen holds his microphone like a boxing compere, clinging on to it as if it’s helping hold him up. And maybe it is, the way he pours himself into his vocal. Sometimes, it does feel like he has a fight on his hands – the sound isn’t great, and Leithauser’s impassioned, plaintive singing can be lost in the muddiness.

Nevertheless, a set heavy with songs from 2010’s Lisbon showcases the world-weary yet hopeful honesty that won the album so many plaudits. New songs Angela’s Surf City and Woe Is Me combine a winning confidence with raw pain and bewildered, ‘little boy lost’ dejection – themes also prevalent in older songs from the repertoire, such as We’ve Been Had and On The Water. But it is when The Walkmen turn their impressive energy upwards, as on the joyful final song In The New Year, that they are at their best.

After five physical performances from each of The Walkmen, the stage looks a bit empty when the two Black Keys appear. They launch into Thickfreakness with no preamble, and the depth and sound quality is so markedly improved that options lie between congratulating the band or castigating the soundman.

Frontman Dan Auerbach is that impressive kind of showman whose guitar becomes an extension of his body. He prowls around the stage with a presence that many a lead singer cannot command with just their physicality, let alone with a heavy piece of wood strapped around their neck.

Auerbach combines riffs with flourishes, retaining a bassy, bluesy undercurrent. He is a lead and rhythm guitarist combined, not to mention a charismatic and authentic blues singer, partnered with crunchy, driving drumming courtesy of Patrick Carney.

They thunder their way through a set including Stack Shot Billy, Girl Is On My Mind and a cover of The Kinks‘ Act Nice And Gentle, playing for a good half an hour before even a sniff of the new material from Brothers. Their experience is evident: anticipation for the new songs is high, but they are in no hurry to pander to it. When the time does come, Auerbach introduces two more band members on keyboards and bass, underlining how spectacular The Black Keys are as a twosome in the process.

A laidback audience greet the songs from Brothers with welcome enthusiasm. The older/wiser man bravura of Next Girl is just stunning, by turns sultry, brooding, bluesy and bold. Everlasting Light, Chop And Change and Howlin’ For You follow in the same assured vein.

All this takes place under a flag of blazing red and black; two enclosed fists, presumably in greeting but more like the beginnings of an arm wrestle. It’s strangely Third Reich meets Black Power, but eventually a semantics student would probably alight upon a theme of ‘brotherhood’. Between song banter is kept to a minimum, and apart from the obligatory “We’re from Akron, Ohio”, there’s the strange claim that “we took ecstasy right before we came on stage tonight”.

They return to a duo for more old songs – the loose rock ‘n’ roll of I’ll Be Your Man, stompalong Strange Times and the bar room blues of I Got Mine, which builds up to such a mammoth finish it seems unlikely they’ll come back.

But they do, full band in tow, to finish with Your Touch. And an impressively deft touch it is.