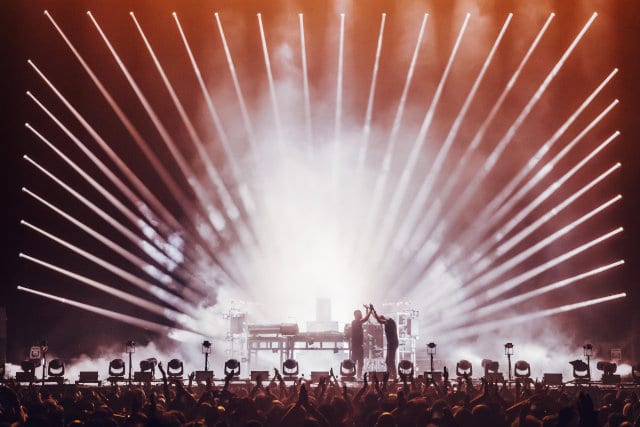 It has been another stellar year for The Chemical Brothers. On the 20th anniversary of one of their best and most enduring albums Surrender, they have reached peak form once again with their No Geography album, a thinly disguised railing against Brexit and the state of the world today. With the album’s release they have reached new artistic heights through their video collaborations, raising the already high hopes for this UK tour.

Live, those hopes were comfortably exceeded. The O2 Arena rose as one when the duo arrived, and were still on their dancing feet two hours later. By that time we had been dazzled by past hits and album tracks of the present, each mixed together into an overwhelming total experience. Phone cameras were aloft for much of that period, and not in an annoying way – people simply had to capture the rush of feeling that comes from the combination of music with primal instinct and the visual brilliance complementing it.

They only needed two minutes to get us onside as Go fired the starting button, setting the bar high with its mechanical figure leaping out of the screen. From there it only got better. MAH took the breath clean away, its lyrics – “I’m mad as hell, I ain’t gonna take it no more” – hitting the nerve with unrelenting accuracy, delivered by a masked figure aiming laser beams at the mass of bodies below. 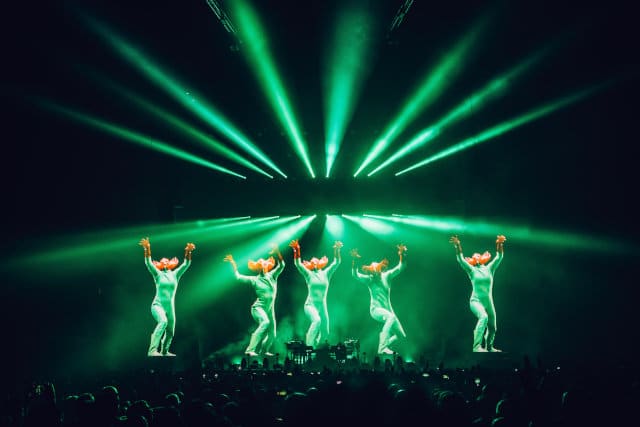 There was music of heady positivity. Got To Keep On was one of several head rushes, the glitterballs reflecting beams of light around the arena while dancing figures dazzled on screen. A triptych of Temptation, Star Guitar and Gravity Drops introduced a warm glow to the heart and the eyes, while Hey Boy Hey Girl saw inhibitions thrown aside as the crowd lost themselves.

To their immense credit the Chemicals did not rest on any hitmaking laurels. There was no Do It Again, Setting Sun or Let Forever Be – instead, those excerpts from Surrender were the ones best fitting the overall performance, complementing the pieces from No Geography. Eve Of Destruction was a chilling inclusion, while Catch Me I’m Falling brought a tear of sorrow and resentment to the eye, clearly aiming its thoughts at those in power.

As they have done all through their career the Brothers revealed The Private Psychedelic Reel as the final track, the epic blast of psychedelia given an accompaniment of stained glass images, the arena becoming a massive cathedral of electronic sound.

Who would have thought when dance music seemed like a short sighted craze in the late 1980s that it would go on to fill arenas like this with music of such overwhelming power and spirit? The Chemical Brothers are not alone in that achievement, but few have mastered their blend of music and visuals, giving the ticket-paying public exactly what they want. In this case it was an opportunity taken to lose ourselves in the moment for two hours of pure sensory heaven, and it was seized with both hands. A better gig experience would be hard to find.