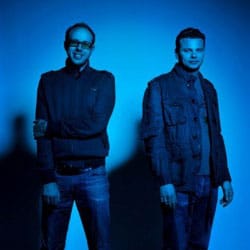 If ever there was a genre just crying out to be invented, it was the glorious mash-up of acid house, hip-hop, indie, techno, electronica acid-tweaking, siren-busting big beats of The Chemical Brothers that soundtracked the mid-to-late nineties like some apocalyptic siren call.

This, their brief six date tour of the UK, including Plymouth for their first time, set a lot of pulses racing in the old-school clubheads and the teen spirits alike.

Once part of the big beat scene they have stayed the distance after seeming to lose favour with the public for a while, and the poorly received but under-rated Come With Us album. Push The Button itself was derided as being Chemicals by numbers initially, but has seen them regain their crown once many of their contenders have called it a day.

Support act Cabedbaby were always going to suffer by dint of being warm up mates of the main feature. Their sonic bombast was not a million miles away from Chemicals territory, and was given an added slant by giving some live drummer/guitarist and vocalist action. Alas, the venue’s acoustics weren’t kind to them and the vocals got lost somewhere in the rafters. The almost imperceptible DJ James Holroyd manned the decks to keep the atmosphere going until the brothers were ready to ‘work it out’.

Then it was a visual rollercoaster ride, sucked through candy-coloured tunnels and spat out before a scary clown proclaiming, “You are all my children now!” as the visuals said “Hold Tight Plymouth!”

Beyond the wall of squelching, tweaked, big beats, the visuals were the selling point here, because let’s face it, the two little Chemical people ducking around their banks of electronics waving their hands is not the stuff of a memorable performance.

Opening with the anthemic and built to survive a nuclear war opener Hey Boy, Hey Girl, this duly set the bar high. Hit after hit followed, with a full-on sonic onslaught that rarely gave up. Plundering their five album back catalogue, and twisting some new noise candy into the mix it was a thrilling rollercoaster of a ride. All top tunes were present from material from Exit Planet Dust through to Out Of Control and recent chart hit Galvanise was duly played out but with a sense of something missing. Using none of the random thrill of featuring one of their many guest vocalists proved a misjudged trick that served to prolong the same level of the gig.

But once the initial salvo of hit friendly beats (opener hey Boy Hey Girl, Galvanise) had done their thing, it all felt a bit ‘repeat formula til fade.’ Take a squelchy-siren blast of tune, break it down, let it build, and build, and build, and build…before dropping the beat back. Or maybe I’m just showing my age, as surely are Ed and Tom.

Ending appropriately with their Private Psychedelic Reel, it was an oddly flat end to an evening of great promise. The Brothers ought to work it out.