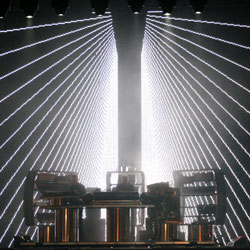 The Chemical Brothers rocked Trafalgar Square last Sunday in front of a crowd of 9,000 – their biggest-ever London Show – thanks to Beck’s Fusions, a unique collaboration between Beck’s beer and that most happening of art institutions, the ICA (Institute of Contemporary Arts).

Beck’s Fusions’ aim is to mix music with visual art in the most state-of-the-art, no-holds barred way, so what more earth-shattering way to kick off this concept than this hands-in-the air aural and visual extravaganza by those legendary masters of the big beat electronic dance genre, The Chemical Brothers?

Before the main event, the crowd was treated to a set from Calvin Harris and Novak 3-D Disco – hence the 3-D glasses! Tom Rowlands and Ed Simons have seen pretenders come and go, and just in case anyone was in any doubt that they were still head and shoulders above the rest in their field, they only needed to show up to this gig.

When these two computer-based musical alchemists are transplanted into a big arena, something visual to complement. This is where Flat Nose George and United Visual Artists came into their own. There was as much to make your eye dance as there was to make your heart sing, as tune after tune was accompanied by truly awe-inspiring visuals.

Whether it was an army of bugs, a series of marching silhouetted monkeys, or perhaps scariest of all a clown’s face writ large across the stage – one was lost for words at the sheer exuberance and technical perfection of it all. Never once during the seamless 80-minute set did the visuals distract from the sound – rather they enhanced everything the Chemical Brothers were doing with their computers. Synchronisation was spot on and utterly seamless.

Without doubt this event will live long in the memory of those present. Awesome and unique – hats off to the ICA and Beck’s for putting on such a great experience.