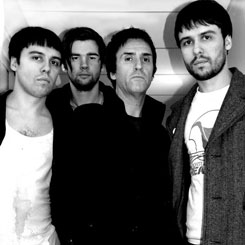 It’s been a good year for The Cribs. As one of our most underrated bands of the last few years, their fourth and most satisfying album Ignore The Ignorant has finally gained them some of the attention they deserve.

Though the three Jarman brothers were already showing steady musical progress, the admission of Johnny Marr as an honorary member of the family seems to have made the difference, as his discreet presence has brought an extra layer of sophistication to their lo-fi sound.

As well as being one of the heaviest touring bands around, The Cribs are known for their fully committed live performances – and their in yer face delivery at Brixton Academy certainly packed a punch, even if it was short on subtlety. Following on from Wichita stablemates Sky Larkin – another Yorkshire outfit, fronted by sweet-singing Kate Harkin – and Cardiff-based eclectoscamps Los Campesinos!, The Cribs hit the ground running in their raw and direct 80-minute set.

Of course the main focus was on their recent output. They played most of the tracks from Ignore The Ignorant fast and furious, barely pausing for breath between songs. The two singles Cheat On Me and We Share The Same Skies went down well, with their big choruses shouted out gleefully by the enthusiastic audience, while the anger behind We Were Aborted, Hari Kari and Emasculate Me (as the visceral titles suggest) was given red-blooded voice.

However, the wistfully melodic Last Year’s Snow and mysteriously moody Save Your Secrets showed the band now have a more rounded repertoire, expressing vulnerability and sadness.

Older songs like Men’s Needs, Moving Pictures and early indie anthem Hey Scenesters! were greeted with cheers and hands raised aloft. In an interesting diversion, Be Safe was played with Sonic Youth‘s Lee Ranaldo delivering his spoken commentary on a big screen, with the help of some bizarre props.

Overall though, it’s a shame that the band don’t take their full-on intensity down a notch or two more often, allowing their excellent songs to breathe and the melodies to come through more strongly.

Guitarist Ryan and bassist Gary alternated lead vocals with plenty of raw power but little variation of tone, with Ross occasionally standing on his drumkit excitedly when the mood took him. The most sedate figure was Marr, rarely moving from his spot on the stage, and though there were a few moments when he stood out, he failed to make the same impact as he has on the recording, when his chiming guitar dovetails so effectively with Ryan’s more angular playing.

Though hardly chatty, Ryan seems to be the most extrovert Crib, at one point following the crowd surfers’ example by diving in headfirst himself, re-emerging to play with his shirt half-hanging off him for the rest of the gig, and with no messing around with encores. Rough and ready is how The Cribs play, and that is how their fans like them.