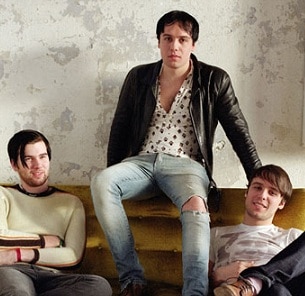 What a night at the Forum. Three generations of musicians who are unafraid to be loud, crowd pleasing and a huge amount of fun. The cool kids might be hanging around listening to obscure DJ sets in Shoreditch, but Mazes, Edwyn Collins and The Cribs are a superb reminder that there’s nothing more fun than crowdsurfing and falling in love with guitar bands.

First up are Mazes. Riding a wave of industry and media hype, they have a cocksure swagger that belies their early slot. Singer Jack Cooper’s American drawl is a slightly grating distraction but they have passion and they have tunes. With an early 90s lo-fi Californian sound, they would be more exciting in a sweaty bar than a venue the size of the Forum but, if they can keep on producing tunes like Summer Hits, they’ll work out how to upgrade before too long. Confident and noisy, they are a great way to get the ball rolling.

When Edwyn Collins takes to the stage he is met with a mix of adoration and reverence. The former Orange Juice frontman’s fight back from a massive, near fatal brain haemorrhage has been well-documented and whilst his movement and speech are still noticeably affected, any fears of a decline in his ability as a singer are instantly displaced. His strong baritone is as thrilling as ever and Losing Sleep more than equals inevitable closer A Girl Like You. The long and close relationship between Edwyn Collins and The Cribs (Edwyn produced The Cribs’ seminal The New Fellas album) is cemented when Ryan Jarman comes onstage to provide backing vocals on a rowdy rendition of What Is My Role. Most of the audience are too young to remember Orange Juice, but when Edwyn leaves the stage the applause is heartfelt and ecstatic. A legend continuing to enthral.

Finally, the main attraction. The Cribs come onstage, appropriately and ironically, to Kiss’s God Gave Rock and Roll To You, before tearing into recent single Come On and Be a No One. It may not be hair metal, but it’s rock and roll and the audience go absolutely mental. The Cribs have always maintained an ardent fanbase, made more loyal by the band’s rigorous commitment to lo-fi integrity and resistance of mainstream stardom. Tonight they are out in force and Ryan, Gary and Ross Jarman are greeted with undying love.Without Johnny Marr, The Cribs haven’t lost their relatively new found professionalism. Leaner and tighter than some of their drunken early gigs, there is a defiance and energy to them tonight which makes old classics seem revitalised. Selecting songs fairly equally from all five albums, Chi-Town sits comfortably next to Mirror Kissers, suggesting that whilst each album has felt like a progression, The Cribs have never lost the original raw approach that made them so exciting in the first place.

It is clear why The Cribs were always a cut above the other bands which emerged in the wake of The Libertines. The contempt hidden behind Hey Scenesters!, the political anger of Be Safe and the yearning soar of Gary’s voice on Men’s Needs reveals a band constantly both at home and uncomfortable with their status as indie darlings and rock stars. A darkness motivates them and makes them deceptively compelling. Behind the heavy guitars and familiar posturing, The Cribs sing about their fear of the insurmountable obstacles in life and in romance. The juxtaposition of strength and weakness is an irresistible mixture.

Ultimately, The Cribs put on a great show. When music is as fresh and thrilling as this, there is nowhere you’d rather be. The Cribs give us rock and roll and we love them for it.