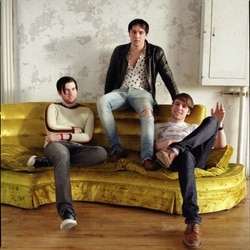 Relationships between artists and money are strange and varied: Nickleback signing a dealworth north of $50 million to make three more albums – not fair.

Phil Collins having to pay a25million divorce settlement – so fair you don’t want to leave it out in the sun in case it burnsto a crisp.

The Cribs claiming to have no cash – definitely not fair.

And it’s not like we’re talking about a lot of money. You don’t get the impression that The Cribsare thinking in terms of gold plated tour buses stocked with Methuselah’s of champagne beingpoured into platinum goblets. Just enough to mean that they don’t have to buy shirts fromH&M, accept clothing gifts from crowds and keep Johnny Marr in whatever it is Johnny Marr wants.

They deserve that much at least. Because, frankly, The Cribs are a national treasure. Particularlynow they’ve fully assimilated Marr into the ranks. At a couple of the shows this year it couldn’thelp but feel that he was only there for novelty value, but now, he’s a fully integrated part of theJarman clan.

No longer The Cribs featuring Johnny Marr, it’s just The Cribs, and you can’t spot where the Jarmanends and the Marr-man begins. What you can feel is the added weight and bite he gives some of thetricksier guitar lines.

It’s billed as a warm up gig for their performances at Leeds and Reading, but given that they’ve spentthe entire summer carting round festivals all over Europe it’s hard to see how they couldn’t havebeen pretty well-stretched already. Still, it’s been a while since they’ve played somewhere ascramped as this and for the 600 or so people crammed in tonight there was a celebratory feel in theair.

But then again, when is there not at a Cribs gig. The usual opening one-two-three of Our BovinePublic, Hey Scenesters! and Don’t You Wanna Be Relevant? might be as predictable a triumvirate ascould have been expected, but when you’ve got songs that ace you don’t really need surprises.

Which is good, because as aside from the unfinished, untitled new one deposited three-quarters ofthe way through proceedings there weren’t any. But it doesn’t matter, because what we did were thebest bits of Men’s Needs, Woman’s Needs… Whatever and The New Fellas delivered with unstoppablegusto and immense charm.

So, for any Live Nation accountants who happen to be reading, what the fuck areyou doing? Forget Madonna, forget U2, and definitely forget Nickleback. Do usall a favour and look towards Wakefield.