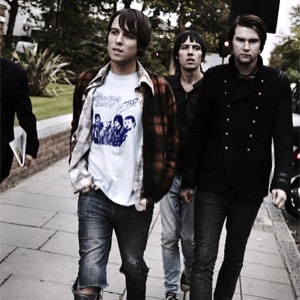 It’s the third age of The Cribs. It’s post-Johnny Marr. There’s no more Marr. And, on tonight’s evidence, it feels right. Things are different here. Not vastly different, not gender-reassignment different, but definitely altered.

It’s hard to know if it was solely down to him, but the band that produced Ignore The Ignorant, their fourth album, was a different proposition to the one that had borne the previous three albums. It’s hard, for example, to imagine anything from The New Fellas being used on Match Of The Day.

Not because of construction. Because of implementation. Everything from the last record was recognisably from the hand of a Jarman, but just a bit more buffed. More polished. More proper.

Not that the Cribs with Marr were particularly sedate. But it’s just, maybe, in his presence they reined it in a bit. An example: at the end of the album version of Be Safe, you can hear Ryan Jarman exclaim, “It weren’t my best version, but who cares…” and Lee Ranaldo responds, laughing, “That’s the spirit”. Would Marr have had the same view of it all?

Whatever the reason, there was a sense of newfound freedom here. Not the unbounded, post break-up joy of getting that succubus out of your life, more the slight lift gained when the cool housemate with the best room moves out. It was a frantic, unrefined, unrestrained blast through Cribs past, present and future. Every song performed as if it wasn’t only the last song of the night, but the last song that anyone will ever play in the world ever.

And you forget quite how brilliant some of these songs are. Be Safe is now comfortably embedded in the upper echelon of Cribs material, Ranaldo’s disembodied projection nihilistically monologuing while the epic chorus scorches through. We We Aborted was smeared across the horizon with noisy, punky abandon and they’ve now even got to the point of having a riff loved enough for a crowd to sing it to them (Another Number).

The wares from the next album were good too. The pogoing Chi-Town reinvents Hey Scenester! as Hey Chicago! (replacing the spitting vitriol with genuine affection). Anna is all grungey broken hearted pleading, and Back To The Bolt Hole showed some quite immense hair-metal soloing. Both of those come off as quite impressively heavy. Slower and less frantic than some, and with a real heft.

Of course, some of that weight could be down to the straightforwardly crap sound in ULU. It was all little more than a muddy mess. Only loud. Hugely loud. The kind of loud that after leaves polite conversation as a series of misunderstandings punctuated with questioning “what?”s.

Which, in a funny way, fitted. The Cribs are back, and throwing back, and the quality of the sound reinforced that throwback. Reinforced the image of a band in the basement idly chucking out songs of piss and vinegar with a melodic heart of gold.

Really, it were great.  We’ll wait and see about upcoming, Steve Albini-produced album The Belly Of The Brazen Bull. We’ll wait and see if the end of Marr has taken The Cribs away from being a band whose songs work accompanying Goal Of The Month. But this gig underlined a modern day musical truism: live, there are few more gloriously fun things than the Jarmans in full flight.