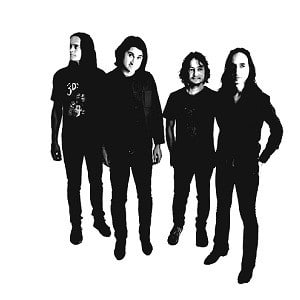 It’s been hard to find a gig buddy for tonight’s show by Kiwi rock n’ rollers The Datsuns. Responses have ranged from “2004 called, they want their music back”, to “really sorry, I’ve got to do a mix tape of songs by The Thrills for someone I met on Friendster” and the especially stinging “mate, I was nine when that song came out”.

For a UK audience of a certain vintage The Datsuns will always be associated with that weird bit of the early-to-mid 2000s when hipsters caught on to fist-in-the-air rock n’ roll, dubbed the ‘New Rock Revolution,’ joining a short-lived scene of jean-jacketed antipodeans that also included Jet, Wolfmother and The D4. Since the bubble burst and tastes switched to poppier (Kaiser Chiefs, Libertines) or more esoteric fare (Bloc Party, Franz Ferdinand) before moving away from straightforward guitar bands altogether, such denim clad rocksim has been deeply unfashionable.

It seems unfair that The Datsuns, the last men standing of that crop, must be haunted by the ghosts of 2003. For a start, as opener Gods Are Bored proves conclusively there is no room for anything post-millenium on planet Datsun. For the New Zealand four-piece time effectively stopped in 1975. As they ever have been, the Datsuns are about combining arena dinosaurs like The Who, AC/DC, Led Zep, Deep Purple, the scuzzier likes of the New York Dolls, Iggy and the Stooges and the Dead Boys, and the odd psychedelic tinge nicked from Hendrix and The Beatles.  The approach is so straight forwardly rock, so happy to let the riffs do the talking and so head-bangingly pure it’s hard to be cynical about.

Tonight’s set scatters material from last year’s Death Rattle Boogie record across pickings from across the last decade, the most generous dollop coming from their 2002 self titled debut, with the ace “widdley-widdley-widdley-wah” fuzz of Sittin’ Pretty making an early doors showing and setting the pace nicely. The bigger cheers are for the earlier stuff, with rapturous responses for the the still-brilliant psycho-stomp of Harmonic Generator and an encore appearance for the hard rock of Motherfucker From Hell, there’s a decent tolerance among tonight’s crowd for pretty much anything with an Alice Cooper riff and a cartwheeling solo.

Frontman Dolf de Borst liberally thieves his posturing from Jagger, Plant and Daltry (“make some mother fucking noise!” “Are you out there London?! WE LOVE YOU!”) and even a “stolen from some Swedish band” (probably The Hives) routine where he encourages the audience to crouch down and pop up on cue.  It’s cliched as all hell, but again The Datsuns are so sincere in their classic rock persona that it never feels especially hackneyed, as it often can when big metal bands try it.

OK, The Datsuns haven’t been especially cool for a decade and ten years is a long time in music, but then The Datsuns genuinely don’t care – they inhabit another era entirely; one of denim jackets, raised fists and hard rock n’ roll. It’s not dated, it’s actually sort of timeless, and as friday nights out go, you could do worse.

The Datsuns MP3s or CDs

The Datsuns on Spotify