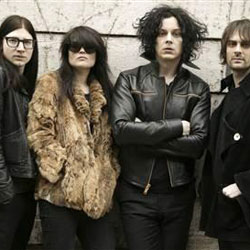 The thing about the bleeding obvious is that no one is that surprised when you report it to them. And in this realm, removing the smug satisfaction that comes with sounding clever makes the whole reviewing thing sort of pointless.

But sometimes the reason the bleeding obvious is so bloody and so clear is because there isn’t anything else there. No distractions, no other layer, no hidden depths. So look, the rest of this could be more obvious than an Enemy fan at a Rachmaninoff recital. But it doesn’t make it any less true.

The first blindingly indisputable thing is thus: the idea of The Dead Weather is great. That all bands in the world have all the other bands in the world on speed-dial. That Jack White, in a free moment between playing in his other fourteen bands, raising his child, running his upholstering service, appearing in films, relaxing with his supermodel wife, decided that he really wanted to play some drums.

So he rang Josh Homme, asked if he knew of any guitarists with some spare time. Invited Kate’n’Jamie round for tea to enquire if they were aware of any female vocalists wanting to live out their Joan Jett fantasies, and then decided to put The Raconteurs on ice in order to free himself up a bassist.

With that, before they even step on stage, there is a cache, and a well of inbuilt good-will; these are people we like and we know to be good.

So of course, there’s far too much talent and charisma on display here to prevent The Dead Weather from being anything other than good. The swampy proto-Zeppelin thrust of I Cut Like A Buffalo pounds away in intoxicating fashion. The dead-eyed blues of So Far From Your Weapon is spooky and swaggering. And Mosshart is a frontwoman transformed, no longer a shy, barely contained ball of rage, she struts, preens and hollers.

Time for the second blindingly indisputable fact. As a drummer, Jack White is an astonishing guitarist. The sole occasion he ventures out – to perform a charged Will There Be Enough Water? – the difference is immediately tangible. More telling, as the other Jack (Lawrence) heads south to warm White’s stool, the difference is somewhat harder to discern.

It’s just kind of hard to see the purpose of The Dead Weather. Maybe it’s because the whole thing is a bit too laid-back for its own good. It’s a bit too much like four friends jamming in the basement with absolutely no pressure on the outcome.

Most telling of all, it looks more fun for them than it is for us.