by Max Raymond
published: 12 May 2010 in Live Music Reviews
Tweet 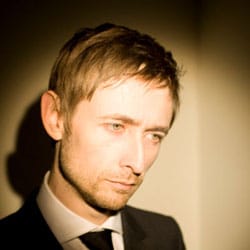 “Does anybody remember the last time I was here?” asks Neil Hannon. One blunt audience member shouts “No!” Hannon replies: “It was in 1996 when we launched Casanova. 14 years ago!”

A lot has happened to The Divine Comedy in the space of that time period. For starters, it is no longer a band; these days it’s a moniker that Hannon releases his own material under. Back then they were flirting with the mainstream thanks to the unstoppable (well, at the time anyway) rise of Britpop. Nowadays, whilst not as widely recognised in the mainstream as they once were, there are still a sizeable number of fans that have continued to pledge allegiance to Hannon’s grandiose brand of pop music.

However, when Hannon takes to the stage at the early time of 8:30pm with no support prior to his appearance, the Tabernacle isn’t perhaps as full as it should be. Regardless of whether or not people got the early start time memo, the evening is a delight. Armed with just a piano and a guitar, it is a stripped back occasion as songs from The Divine Comedy’s 10th album Bang Goes The Knighthood are premiered to a London audience.

The new material showcases an even more playful side to Hannon’s songwriting than on his most recent albums, and they work like a charm in the intimate surroundings of the Tabernacle. Current single At The Indie Disco and The Complete Banker show off plenty of wit and wordplay in Hannon’s lyrics. Down On The Street Below is far mellower but no less magnificent.

The lion’s share of the setlist however is taken from Hannon’s now wide-ranging back catalogue. From recent cuts such as Count Grassi’s Passage Over Piedmont and Our Mutual Friend via crowd pleasing singles like Becoming More Like Alfie to songs that are nearly two decades old such as The Pop Singer’s Fear Of The Pollen Count and A Drinking Song, you get the sense that Hannon could whip almost any song he wanted to; he proves it with a reconstruction of MGMT‘s Time To Pretend, lush on grand piano, and borrows Jiggery Pokery from his other project The Duckworth Lewis Method. It’s this level of surprise that makes the gig feel much more of a treat, especially for the long-time Divine Comedy fan.

Hannon himself was in typical jovial spirits and is, perhaps unsurprisingly given his elaborately constructed tunes, a natural when it comes to showsmanship. He encourages the crowd to sing the brass melody of The Frog Princess and even gets one person up onstage to tell a joke as part of his main set closer Can You Stand Upon One Leg (which, he tells the crowd to much amusement, he didn’t hear until it was explained to him in the encore break). It’s the sheer effortlessness of his presence, as well as the experience of having a very long career in music, that makes him a joy to watch.

By the time the last bars of National Express, a perfect singalong finale, ring out the crowd looks closer to sold-out proportions. Even though a lot has changed in the 14 years since his last Tabernacle visit, the quality of The Divine Comedy’s output is as strong as it was in the days of Britpop. Tonight is a glorious reminder.

The Divine Comedy played: The Complete Banker, Tonight We Fly, At The Indie Disco, Down On The Street Below, The Popsinger’s Fear Of The Pollen Count, Everybody Knows, I Like, Time To Pretend, Becoming More Like Alfie, A Lady Of A Certain Age, Songs Of Love, Count Grassi’s Passage Over Piedmont, The Frog Princess, Jiggery Pokery, Have You Ever Been In Love, Our Mutual Friend, A Drinking Song, Can You Stand Upon One Leg. Encore: Mastermind, If…, National Express