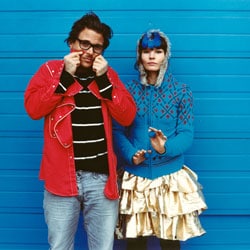 The first thing you notice about the stage setup for Finnish/French duo The Dø’s show at Bush Hall is just how much stuff there is. A megaphone, saxophones, bells… it’s quite an achievement that they’ve got enough room to move about. Even the set of cymbals and percussion instruments placed towards the back curtain resemble something you’d find at a branch of Lakeland. But that is what’s needed if they want to do a good job of replicating all the different sounds and dynamics of their recorded output, including last year’s enjoyable sophomore effort, Both Ways Open Jaws.

The gig is a sell-out, with the room filled up within 45 minutes of doors opening. It is at that point where the band, extended to a quintet, take to the stage, with no support act. At first it appears as if lead singer Olivia Bouyssou Merilahti is quite shy but she goes some way to rubbishing this assumption instantly. Not only is she a captivating frontwoman but her vocals are superb and there’s not a single duff note all evening.

But what of the songs? Live, they are considerably more powerful and in-your-face – and this is no bad thing. The carnivalesque rhythms of Slippery Slope are prominent and Bohemian Dances does grandiose very well without being overblown. On Both Ways Open Jaws the impact is a lot more subtle. The fact that the songs are far more energetic live is both surprising and delightful.

Away from the multi-layered material they can also do pretty conventional, straight-up pop songs pretty well. At Last, which is a highlight of their three-song encore, is melodic and catchy as is On My Shoulders. Both of these have a sophistication about them that is quite irresistible and, amidst all the instruments onstage, is a reminder that they know how to write a damn good pop hook and that it all isn’t style over substance.

Not all of it is as good though. Too Insistent, one of their best songs, doesn’t have the same magic live and the wig-out towards the end feels a bit unnecessary. Indeed, there’s a few moments where they indulge in this and by the time that the concert-closing tune Dust It Off extends its own outro, the trick has lost its affect.

However, despite the occasional gripes, The Dø are a really enjoyable band to see live just because of how much they’re able to do in their set. The band that Olivia and Dan Levy have recruited for their performances are well skilled, and it’s fun to see what instruments they’ll play (it almost becomes a game). The one criticism is that they’ve yet to work out how to keep the early momentum going for 90 minutes, but at the end of the evening we leave Shepherd’s Bush confident that they will get there eventually. You leave wanting to see them again.

The Dø on Spotify