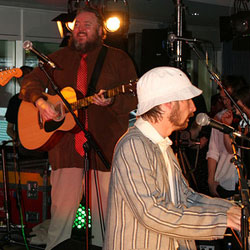 Neil Hannon and Thomas Walsh are on a mission to cheer us all up this soggy summer. As The Duckworth Lewis Method the duo, of The Divine Comedy and Pugwash respectively, have created a concept album entirely about the noble art of… cricket.

Ahead of the Ashes, and with a stage built in the England Suite of the Oval cricket ground offering a panoramic view of the rain-sodden crease, Hannon, Walsh and their full backing band play a one-off gig to showcase the eponymous album.

Hannon as Lewis, sporting a stripey blazer and a floppy white sunhat, sits poised at keyboards while Walsh as Duckworth stands with rhythm guitar. An electric guitarist, bassist and drummer make up the rest of the band as they open with the swiftly over The Coin Toss and British Empire comedown The Age Of Revolution.

“Always denied entry by the English gentry, Now we’re driving Bentleys, playing Twenty20,” sings Lewis over a ’30s era mute trumpet sample, as the duo consider the history of the game and its originators in a present-day context. The Age Of Revolution, the first single, sounds even better live than it does on record. Gentlemen And Players by contrast recalls an earlier time of cricketing whites and village greens on Sunday afternoons.

After this nostalgic look back through the mists of time, the glammed-up The Sweet Spot gets the audience attempting some dance moves before Lewis takes things in a Coward direction with the tongue-twisting Jiggery Pokery, the lyrical highlight of an album not short of them that turns the 1993 Ashes and Shane Warne’s appearance into legend – all told from the point of view of a flummuxed Mike Gatting.

The IT Crowd‘s Matt Berry is the evening’s special guest, taking to the stage for some mid-song commentary in the harmonic perfection that is Mason On The Boundary, and the band follow this with second single Meeting Mr Miandad, a chirpy jaunt about heading “to Pakistan in a VW camper van”. The Nightwatchman changes the mood, a gorgeous melody swathed in piano and strings that wouldn’t sound out of place as a ’70s Hollywood love theme had it not been all about cricket.

The lovely harpsichord-laden harmonies of Flatten The Hay, with Walsh taking lead vocals, the TV theme in waiting Test Match Special and the layered vocals of The End Of The Over conclude the album and the set. They apologise – they have no more songs; at least not as The Duckworth Lewis Method. But both have sizeable canons of work for their other operations, and we get one from each recontextualised. Fitting the bill perfectly is National Express, Hannon’s contribution and The Divine Comedy’s only Top 10 single; a novelty number now fixed to a novelty set in a novelty setting. Walsh’s contribution is no less jaunty; Pugwash’s It’s Nice To Be Nice completes the 50-50 share-out.

There’s only one thing left to do in such a setting and, with Hannon and the guitarist swapping places, TV cricket theme Soul Limbo is bowled at the delighted audience, topping off a jaunty evening in the company of men at the height of their game.