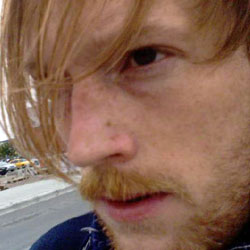 It’s a warm Friday night and anyone who has been locked in hibernationfrom dreary skies, gloomy headlines and relentless G20 hype is out and aboutenjoying a tangerine sunset in London.

Cargo’s Free Fridays night of DJs and live music in an east Londonclub-meets-gastro setting has proven a good draw, and proved to be again tonight. But it’s perhaps an odd place for Axel Willner toshowcase The Field’s forthcoming album, Yesterday And Today.

The atmosphere is all drinks, meets, parties and a big Friday nightout – not what you’d associate with the more experimental, ambient furrowWillner plots.

This manifested as soon as the band – Willner has accomplices these days – came on, ramming one of the newsongs, Leave It, straight down our necks milliseconds after the Allez AllezDJs stopped. It sounded initially like a sound check, but its skippy,choppy loops skittered along for close to 10 minutes, sounding far lesswelcoming than on the new recording.

This confused the crowd, whose initial bobs of euphoria to the tune of abeat gradually subsided into a sway of uncertainty. The Little Heart BeatsSo Fast picked things up with its rising throbby beats and vocal samples,but the set flatlined after that.

Willner’s plaintive expression gave little impetus either. He rarelyglanced up from his mixer, save to suck down bottles of lager. As the set wore on the crowd got drunker and rowdier.

The live instruments were erratically turned up, in contrast to themixer and synths, fragmenting the impeccable harmony of The Field’s sound.Even their best ear bending moments from From Here We Go Sublime, like Everyday and Over The Ice, soundeddecidedly average.

None of this should dissuade fans from the promise of the forthcoming album(which we’ve heard snippets of) – little of it was aired.Tonight simply seemed to be a case of wrong venue, wrong crowd and wrong night.