The Frank And Walters @ Borderline, London 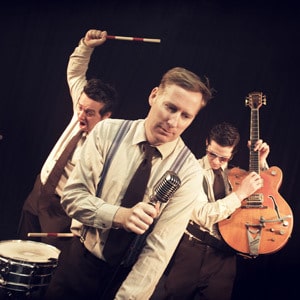 Semi-naked Kraftwerk covers before a sold-out crowd which is rabidly baying the band for more? Not a sentence you’d necessarily associate with The Frank And Walters, a band whom seem forever cursed for having the temerity to visibly enjoy playing their music and, gasp, not taking themselves, or the music business, entirely seriously.

But The Franks’ appearance at the Borderline was not a re-treading of past glories. The band have a relatively new line-up and a new album, their sixth, entitled Greenwich Mean Time. In fact, it’s hard to imagine that its twenty years since the Cork trio enjoyed their honeymoon period with the UK music press, regaling journalists with excitable tales of dressing up as ninjas to dig tunnels under the stage while on tour with the B-52s as they effortlessly churned out the chiming pop singles about benevolent bus drivers and catastrophic developments within the New York fashion industry.

Of course, the bubble burst and by the release of 1996’s Grand Parade, The Franks were an anachronism, an unwelcome reminder of the days when indie rock was not saturated in monochrome, monoethnic, turgid Dadrock, led by inarticulate flag bearers for the very worst excesses in British rock. But at the Borderline, it was less the hits and near-hits which propelled the band’s set into the realm of the euphoric, it was the likes of New York from Glass, an album which saw the band indulging in a casual fling with Pet Shop Boys-style electronics, Landslide and most notably, Plenty Times, an elegiac, moody superhit in an alternative universe, which saw the band belatedly embracing a weary maturity.

And the band’s experience in the business shows – they have their stage show down to a tee, with mainstays Ashley Keating and frontman/bassist Paul Linehan effortlessly pulling off a double act, gently berating their bandmates, the audience and each other – all of which was lapped up by the fiercely parochial crowd. If anything, the Franks gigs resemble football matches with the assembled throng offering unequivocal support for their indie heroes.

Playing immediately before the Franks were their labelmates Slow Motion Heroes. Close your eyes and you hear glorious – if abrasive – harmonies and complex song structures punctuated by call and response vocals, impeccable craftsmanship which surely can only be created by suave artisans steeped in the urbane pop vernacular. Open your eyes and you are greeted with a positively feral looking sextet, consumed with miscellaneous facial hair, impenetrable accents and a frantic frontman resembling Ian Brown after a feed of poppers. They’re also rather impressive, at the very least the equal of The Franks, proffering a slow-release approach to their songs, which are deceptively gentle before exploding in a constellation of soaring keyboards, guitar noise and barely concealed melody. Watching the Slow Motion Heroes was akin to musical catharsis, the band applying a primal remedy to the scourge of anodyne pop.

Whether the success of the evening will have a knock on effect for The Franks is questionable; it’s hard to imagine the band returning to commercial glories. Yet the music industry is a considerably changed beast from the glory days of the early ’90s. Unlike many of their contemporaries, The Franks are not on the comeback tour mill – they never went away in the first place – and they’re still willing to go through the slog of playing the same venues without ever compromising their music. The band have found a route which works, and a sizeable audience offering unwavering support. And surely that’s a success story which outweighs anything and everything else.