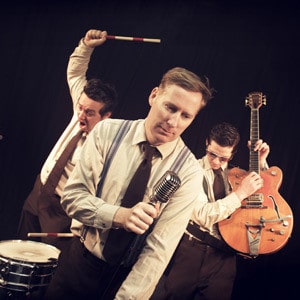 The Frank and Walters

They’ve been away for far too long. Don’t take my word for it – believe instead the punters who’d made sure The Frank And Walters‘ Borderline comeback was completely sold out despite minimum publicity. The Franks are back, and their fans had certainly not forgotten them – or how to show their appreciation of the Cork indie heroes.

“We are, we are, we are we are we are The Frank and WAAAAL-ters!” chanted the packed football terrace that passed for an audience area in front of the stage. Between sets from two talented support bands, the chant would break out spontaneously from one or two people, to be instantly taken up by all and sundry. It was set to be a grand night, and the first band, Hybrasil, couldn’t have got things off to a better start.

Now labelmates with Ash Keating and Paul Linehan’s operation, Hybrasil managed the difficult task of just about making the place their own. A highly polished find of a band, they combine prominent keyboards with an ear for energetic rhythms. The singer occasionaly mucked about with bits of percussion, closing the set by setting himself up as a second impromptu drummer on the instrumental track Hy Fy. They left the stage to much applause and the sound of audience members asking each other who they were. They made many new fans tonight.

As seems almost inevitable at the Borderline, the evening’s programme was already running late, and second slot occupants Beauty Shop were regrettably faced with braying Franks fans heckling for the headliners throughout their set. Wisely, the three-piece ignored them and played on. Their sound sits somewhere between Crash Test Dummies and the acoustic moments of Foo Fighters, with a twinkling of oddball Nashville guitar thrown in for good measure. They did their best with cruel billing.

Finally, to delighted applause and whoops, on came The Franks. It was like they’d never been away – Paul immediately began to complain about monitor levels in between decidedly Irish chatter with Ash, while new guitarist Kevin stood sheepishly by the old timers looking young and awed at the reception. What followed was a dip in to their forthcoming fifth studio album (due in 2006), cut through a carefully chosen “best of” set drawn mainly from Trains, Boats and Planes, Grand Parade and Beauty Becomes More Than Life. Without a synth on stage, Glass’s more electronic material didn’t get much of a look-in.

Thus it was that the joyous chorus of After All had the whole room bouncing and singing along, while in Indian Ocean Paul found himself duetting with the entire room even in the verses. Clearly, it’s not just the effortlessly upbeat tunes and poignant, honest lyrics that cause such devotion to The Franks – it’s more than that. This was a room full of people reliving happy memories from gigs of yesteryear. Colours left everyone grinningly inanely and the enthusiasts at the front couldn’t resist the urge to crowdsurf.

An overzealous bouncer spotted what he thought was trouble and began strongarming fans – but maybe nobody told him this is a Franks gig and there’s never any trouble. “Hey, if they cause any trouble you can hit me,” interjected Paul, annoyed at fans’ enthusiasm being bludgeoned before his eyes. More roars of approval. Live favourite Michael and How Can I Exist? were aired too, and of course everyone knew Fashion Crisis Hits New York. Husky voices were heard at the bar later.

The new material offered a glimpse of an album that’s returning The Franks to their basic set-up of guitar, bass, drums and vocals. They’ve got their electronic flirtation out of their system – “15 years too late or five years too early,” as Ash says – and the next record sounds like being well able to create its own unforgettable memories. In the meantime, The Frank and Walters had just given London one of the best live music nights out of 2005.