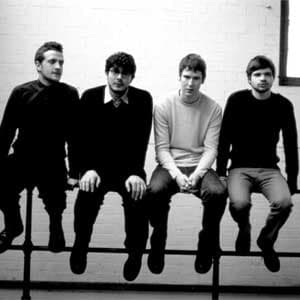 For a band more used to playing sweaty ‘toilet’ venues, The Futureheads have surely landed on their feet tonight. “It’s nice to play in a venue that doesn’t smell of vomit,” quips front man Barry Hyde. The Union Chapel might seem an unlikely venue for the band – survivors of the post-punk explosion of the early noughties – but their new album, released just a few days ago, is a collection of a cappella covers of their own songs, some of their favourites by other people and reworkings of ancient classics. A cappella literally translates as “music from the chapel” – so maybe it’s not such a far-fetched concept after all.

That album, Rant, features a handful of songs from across their four previous albums, but these pale into the background alongside the carefully deconstructed songs they’ve pinched. Tonight, however, they delve further into their back catalogue, dragging out fan favourites and forgotten gems.

They cheat slightly, occasionally using acoustic instruments – Decent Days And Nights enjoys a furious guitar and cello accompaniment, their version of The Television Personalities‘ A Picture Of Dorian Gray is banjo-heavy, while a reworked Carnival Kids is led by a mandolin. Hard To Bear is worked into a barn-storming country number, a Greek take on The Beginning Of The Twist turns up the tempo, but News And Tributes lets the set down, with a bog-standard, plod-along indie backing.

They’ve always worked harmonies into their songs, but tonight’s carefully arranged four-part harmonies are a step beyond the “oh oh ohs” that made their cover of Kate Bush‘s Hounds of Love an indie disco favourite. They stand in pitch-order across the front of the stage, waving their hands in the air as the melody reaches them, like clever school boys who know they’ve done well.

One of Rant’s highlights, their take on Meet Me Half Way by Black Eyed Peas (“It’s serious, it’s not ironic like Hounds of Love” swipes co-vocalist Ross Millard) echoes through the chapel with spine tingling sincerity; a desperate plea that casts a cloud over the original. Similarly, their version of Richard Thompson‘s Beeswing sees the song translated into a finger-clicking sea shanty, with Hyde’s heavily accented vocals more prominent than ever. Introducing their cover of Acapella by Kelis, Hyde explains: “This is the song that started it all. We had the audacity to go on the radio and sing this live, and when it wasn’t terrible we decided to do an album of it.” It’s fun, and a bit of a novelty, but the ideas it spawned are far from it.

One of the most surprising parts of Rant is their interpretations of lost traditional folk songs and The Keeper, written in their hometown of Sunderland; Hanging Johnny, a murderous sea shanty and the hilarious 19th century drinking song The Old Dun Cow are among the best received tonight.

The full force of tonight’s venue kicks in when they’re joined on stage by support act The Cornshed Sisters and a 15-piece choir. They’re joined by the band to form a horseshoe around Hyde for a heartbreaking rendition of Thursday and Sparks‘ The Number One Song In Heaven. Highlight of the night comes courtesy of Summer Is Icumen In which the band are keen to point out, is the oldest song in the English language. As the 20 plus voices chant around the chapel, it’s hard to imagine a more perfect venue.

They end with Hounds Of Love and bundle off stage delightedly slapping each other’s back. They feel like a band who, after four albums of so-so indie, have finally found themselves. It’s a remarkable transformation. It’d be a difficult and brave decision for them to make another a cappella album, but whether it’s a one-off or not, it feels like we’ve just witnessed the highlight of their career.

The Futureheads MP3s or CDs

The Futureheads on Spotify