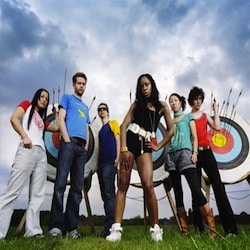 It’s grim times out there. Another recession looming, spending cuts biting deep and, being February, it’s cold, wet and miserable to boot. It’s why we need The Go! Team more than ever.

There were some rumblings on the recent release of the Brighton collective’s third album that it was just more of the same. Which, surely, is exactly the point – when you want big, loud, colourful big beat anthems with a large degree of hip-hop sensiblity and cheerleader-style vocals, you go to Ian Parton’s band.

And while such relentless positivity may seem a bit daunting and exhaustive to listen to on record, it’s live that The Go! Team really make sense – even at the ridiculously early start of 8.30pm.

That early start means that the Sheffield crowd aren’t quite displaying the necessary energy, and the first few songs tonight sound a bit flat. It’s a shame, as the six people crammed onto the tiny second stage of the Academy, especially vocalist Ninja, are obviously giving their all to whip the crowd up into a frenzy – or, at least, do something other than nod their heads politely.

Opening track T-O-R-N-A-D-O give a pretty accurate idea of what to expect – heavy on the breakbeats, frantic rapping from Ninja and sampled horns blasting out. When the addictive riff from Grip Like A Vice kicks in, the first murmers of enthusiasm from the loosened-up crowd are noticeable.

And from this point on, the atmosphere begins to improve ten-fold – by the time that Ladyflash rolls round, the entire Academy is jumping up and down, singing along and chants of “Go! Team! Go! Team!” are echoing through the venue.

The new material fits in pretty well – only Ready To Go Steady, while cute, comes across as a bit twee – and tracks like Secretary Song and especially the glorious soaring chorus of Buy Nothing Day go down a storm.

It’s almost as entertaining watching the band as it is to listen to them – if you can take your eyes away from Ninja’s seemingly relentless energy, the rest of the band are rushing around, swapping instruments (sometimes in the middle of the same song) or just jumping around like they’re having the time of their lives.

One slight flaw is that the Academy’s second room is almost too small for the band’s big sound – the two drummers seem a bit superflous when the sound is as muddy as it can be at the Academy 2. Yet that’s a minor quibble – and when classics from the debut like Bottle Rocket and The Power Is On are dusted off, it just boils down to simple, joyous fun – music to sing along to, dance, and – yes – wave your hands in the air to.

If the rumours are true that Rolling Blackouts could prove to The Go! Teams’s final album, then that would be a shame – as tonight proves, we need their brand of big fun pop more than ever.