The Good, The Bad & The Queen @ EartH, London 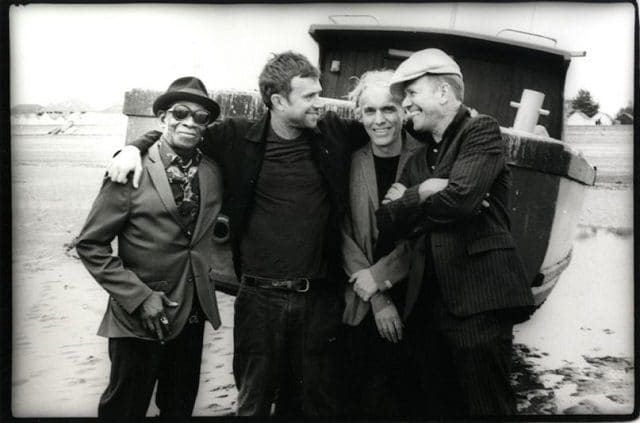 The Good, The Bad & The Queen

One of the most pleasant surprises of 2018 has been the return of The Good, The Bad & The Queen with new album Merrie Land, 11 years after their debut eponymous album.

It seemed that, amidst all front man Damon Albarn’s multifarious projects (notably, Gorillaz), his supergroup with bassist Paul Simonon (The Clash), drummer Tony Allen (Fela Kuti) and guitarist Simon Tong (The Verve) would be a one-off exercise. But their recent short tour to promote their new album proved they are, in fact, alive and kicking.

If the band’s first album was a love letter to multicultural London, the ironically titled Merrie Land is about the bitterly divided country we inhabit in the shadow of the Brexit referendum and the Windrush scandal. Its depiction of an island turning inwards upon itself is more overtly political, more downbeat and more Albarn-led than its predecessor.

Although the band had already played warm-up gigs in North Tyneside, then full-scale shows at Blackpool (that quintessential English seaside town, where the album was mainly created) and Glasgow, it does seem a bit contradictory to end this mini-tour of a state-of-the-nation album with three consecutive nights at the new venue EartH in east London’s trendy Dalston. Preaching to the converted perhaps?

With unusual professional punctuality, the band appears on stage bang on time to a warm reception from an adoring, sell-out crowd. They play two sets: first, the whole of Merrie Land, in original track order (usually done only by bands showcasing their ‘classic’ albums in anniversary gigs); then, after a five-minute interval, six tracks from their debut.

Backed by a large picture of a seaside pier, and presented in moodily expressionistic lighting, the band play beautifully – as if they’ve never been away – in a show that is full of haunting melancholy. They are augmented by an all-female, beret-wearing string quartet, an organist and a percussionist. Oh, plus a few slightly creepy puppets, including a ventriloquist’s dummy sitting on a chair at the front of centre stage. In a surreal episode, Albarn vocalises the spotlit ‘Sam’ with a Wolverhampton accent, before singing the jaunty 80’s Life while manipulating the cheeky chappie’s mouth and arm.

At times, it feels like Albarn is pulling the strings of the whole show. As lively as ever, he is perpetually on the move, pressing hands with the standing crowd at the front, encouraging singalongs and hand-clapping, chatting to the audience, cosying up with his band-mates and even ‘conducting’ the string players. As well as singing, he often sits down to play jagged piano riffs, plus acoustic guitar and even melodica.

The music mashes up art rock, English folk, fairground organ, music-hall piano and reggae. The gig starts with the circular plaintive melodies of Merrie Land, which sets the tone for the evening. Albarn sings more in sadness than anger: “If you’re leaving please still say goodbye? . . . Are we green, are we pleasant? / We’re not either of those.”

The Great Fire is a Specials-like number with ghostly echoes. On Lady Boston we are invited to ‘fill in’ on backing vocals for the Welsh male voice choir used on the record, while a penny-whistle player comes on for Drifters & Trawlers. The Last Man to Leave is a nightmarish vision of Britain, with off-kilter vocals, eerie organ-playing and discordant strings, while the closing song of the first set The Poison Tree has a gently elegiac quality.

The older songs are greeted by the audience like long-lost friends. The darkly toned Kingdom of Doom is followed by the dub-textured Three Changes, while closer The Good, The Bad & The Queen speeds up manically like a carousel spinning out of control. It’s a dramatic end to an artfully staged evening.