The Good, The Bad & The Queen @ Roundhouse, London 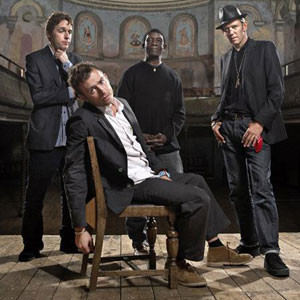 As co-curators of the inaugural BBC Electric Proms, Damon Albarn and The Clash bassist Paul Simonon’s headline night at the spectacularly regenerated Roundhouse was always going to be one of the festival’s talking points. Together with drummer Tony Allen and guitarist Simon Tong they make up The Good, The Bad & The Queen, and tonight’s show is only the band’s fourth, and first in London.

Warming up the crowd are two acts separated in age by 66 years, the first representing the city as it was, the second as it is – at least to them. Calypso man Young Tiger, at 86, was introduced by Albarn along with the London Is The Place For Me Allstars, an eight-piece in a line featuring sax, tribal drums and double bass. Our main man sat throughout, behatted in red, reading his lyrics from crib sheets with a booming voice that belied his years and told tales of life as a Caribbean immigrant in 1950s London.

The original London Is The Place For Me album was the first release from Albarn’s Honest Jon’s record label and would go on to form the basis of a series of releases. One memorable track from the album told of the new arrival’s awe at witnessing the pomp and splendour of Queen Elizabeth’s coronation half a century ago – and here, the not so Young Tiger sounded just as thrilled at having witnessed the event. Musically, the band’s charmed calypso dispelled the autumn outside. The carefree tempo of Buena Vista Social Club was called to mind, but the Tiger’s English lyrics were what resonated. Rapturous applause saw him off stage complete with walking stick – quite overcome at his reception.

After such an affecting beginning, Wimbledon lad Jamie T had the evening to lose. From a four-week residency at the London’s tiny 12 Bar Club where he appeared solo with just his acoustic bass for company, Jamie now has a major label budget to hand and, as with his contemporary Lily Allen, has had a band stuck to him. His acoustic bass, he told us, had broken on his way to the gig and he was playing someone else’s. He opened with it, his quickfire rap-singing causing people on either side of me to ask where he was from.

For much of his set, the full five-piece band kicked in and played souped-up, speedy versions of his demos, EP tracks and a fair few unfamiliar numbers. Salvador was given an early outing, with whoops of recognition confirming its place as a staple of the Jamie T set.

If there are references to The Clash‘s punky style and lyrical inventiveness, Jamie T surely has affinity with Paul Simonon as one inventive bassist to another. Jamie’s references go well beyond homage though – he’s producing music that sounds like no-one else’s. Swapping the bass for an electric guitar, he proved versatile as well as creative. Northern Line referenced the tube line running underneath the venue, rooting his set in the area. Back In The Game and Living With Betty, despite being from an album not released for another three months, had a smattering of fans singing enthusiastically along. Sheila closed out his set at breakneck speed, with only Brand New Bass Guitarist left to punch home Jamie’s take on life to the great and good of Camden.

And then came the main event. A detailed backdrop, part Moulin Rouge cityscape and part backlit mood-maker, set off our headlining vagabonds. And there was Damon Albarn, in the flesh, not a cartoon character in sight. His two-piece suit, hat and shirt created a visual overtone of the Artful Dodger, while the lanky and effortlessly cool frame of Paul Simonon appeared yet lankier, topped off with a pork pie hat. If you’d met these guys 50 years ago in a dark alley, they’d have been your local hoodlums. Grandly and with authority, Albarn announced they’d play the whole of The Good, The Bad & The Queen in order – it’s the title of the project’s album, due in January, rather than the project itself, we’re told.

Albarn positioned himself at an upright piano and unleashed History Song – a fitting grounding for an evening so replete with it, and a track laced with dark moods reminiscent of the second Gorillaz album’s most atmospheric numbers. For 80s Life Albarn swapped his piano for centre stage, a place otherwise occupied by Simonon as though he’d never been away. Later, during Kingdom Of Doom, Albarn admonished his band – and there was no doubt this was his band – for playing like “shit”. “We can play better than this,” he told them. To applause, they began the song again without a peep of protest.

Herculean caused audience whoops and howls from the opening bars, and while it’s not a song with memorable hooks, it leaves a lasting impression. For a track called The Bunting Song, Albarn swapped to what looked like a tenor recorder before giving up the stage to Tony Allen’s mercurial drumming. He’d swap to acoustic guitar too for A Soldier’s Tale. Guest vocalist Eslaam Jawaad appeared later in flowing robes to contribute vocals to Herculean B-side Mr Whippy, a track not expected to be on the album. As the only guest star, he made an imposing entrance.

They left stage after the title track, and no encore was necessary. Not only had a fascinating new project been heralded, but its lineage had been set out for all to see. While The Good, The Bad & The Queen may never achieve the commercial heights of Gorillaz or even Blur, there’s a sense that this project has a higher purpose.