by musicOMH
published: 14 May 2009 in Live Music Reviews
Tweet 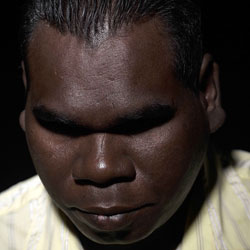 Festival promoters aren’t stupid. Unlike sunnier climes like California and Sydney, shoving 300 bands and over 10,000 paying punters into a British field in May and praying for decent weather is tantamount to commercial suicide, and so the year’s second UK major festival, the Great Escape, got underway safely inside Brighton’s multitude of concert venues.

Threatened thunderstorms had thankfully stayed out to sea allowing a barbecue at Audio to take place unhindered and Frankmusik to spin some tunes as burgers were chewed and itineraries planned.

As barbecue ash swirled and covered everybody like a dandruff storm, our eagerness to get the evening’s first band seen and heard could be resisted no more.

First up was an earlybird set from Friendship, whose frenergetic (frenetic + energetic, geddit?) racket, typified by single The Graveyeard Shift, the only track anybody much knows at the moment, did what this festival of new music is meant to introduced a new act to an audience none the wiser until this moment.

Scottish five-piece My Latest Novel got an impressive crowd for an early slot at the Honeyclub, and their epic emo songs went down fairly well. You get the feeling that their downbeat Arcade Fire style has certainly captured a fanbase, and with second album Deaths and Entrances just out, it’s the type of music that could grow with repeated listens, and the mood fitted the grey and windswept start to festival.

At Komedia, golden-maned, pink shirted Högni Egilsson, singer and guitarist of seven-piece Hjaltalín, told us: “So we have in this country called Iceland an economic crisis and we hope you have it too!” This most curious of benedictions was followed up with another. “Do a favour for Iceland. Vote for Iceland in Eurovision this Saturday!” A chorus of boos was reward for his trouble. But while the exchange confirmed yet again that everyone, simply everyone in Iceland is the very definition of quirky, Högni could say what he liked from a position of strength. Their set suggested we’re going to hear a lot more of them. For one thing they were the only act we saw all weekend who take to the stage with a bassoon. Requisite Arcade Fire comparisons all indie rock bands with dramatic songs get lumbered with are appropriate, but Hjaltalín never lose sight of their goal of creating pop music from their rich palette of instruments and ideas.

Future Of The Left, formed of members of Mclusky and Jarcrew, have been round for nearly three years already. Forthcoming second album Travels With Myself And Another underlines that the Welsh trio make palpably energetic music to go deaf to, and The Salllis Benney Theatre is packed for their only set of the festival. Somebody muses on whether the bass is too loud and somebody else demands it be made (somehow) louder as they urge us to “Come join our lost cause” on The House That Hope Built. Unlike so many indie bands, Future Of The Left’s cause ought to be far from lost.

Back to the beachfront and at Digital we catch a couple of Emmy The Great‘s songs. She’s charming as ever and puts in a crowd-pleasing rendition of First Love. Back at Po Na Na, New York girl gang The Vivian Girls put in a show with strong songs rooted in mid-’90s grunge rock. With the tiny venue full, the girls pull it off and impress by switching instruments for their final tune.

Anja Plaschg, aka Soap&Skin, will support Patti Smith at Ornette Coleman‘s Meltdown in June. Tonight she’s in the more intimate setting of the Unitarian Church with just a grand piano, a laptop and some eerie green lighting to showcase material from her recent album Lovetune For Vacuum. It suits the Austrian’s starkly spectral, piano-led music to play in a church, though the green lighting and her dark costume gives her a goblin-like appearance. Her vocals in places reminds of the alienesque Karin Dreijer Andersson, while her often dramatic music sits closer to that of Bat For Lashes if she’d been trapped in a central European castle awaiting rescue by a promised lover for 100 years. Cry Wolf is among the standouts from a set dripping with intent that soaks in gradually rather than immediately.

Geoffrey Gurrumul Yunupingu, or Gurrumul if you’re in a hurry or prefer his traditional tribal name, flew from the far side of the world to be with us in Brighton. The blind Arnheimlander is billed as the world’s first aboriginal superstar and, with his (white) backing band of guitar, violin and bass, has the potential to do an Amadou & Mariam style crossover to the mainstream with music that’s easy on the ear, of a largely peaceful pace and comprised of a curiously western sound. Connection from Gurrumul himself with his audience between songs was sadly sparse, bassist/producer Michael Hohnen electing to speak on his behalf, but his intricate acoustic guitar fingerpicking and a startlingly unique voice that’d stop an advancing army at 50 paces suggest that, however he’s currently presented, he has the talent to win out.

Amidst the chitter chatter and clinking of coffee cups, Iain Archer took to the stage in the unlikely environment of Redroaster coffee shop and strummed out songs from new album To The Pine Roots. Tracks like Songbird and Black Mountain Quarry perfectly depict the landscapes of the German pinewood forests Archer disappeared into to write the album, whilst his almost whispered vocals were rich and engaging enough for onlookers to abandon their chai lattes.

At peak time there were more good bands to choose between than ever. Foregoing the likes of Rosie And The Goldbug, Chew Lips and Danananakroyd, it was impossible to turn down the opportunity to see Evan Dando. But having waited a full 40 minutes before he finally takes to the stage, the crowd are aware of what they’re missing elsewhere. But when he does show up, looking suitably mucky, Dando proves to be one of the evening’s surprise highlights. Performing with just his own guitar for accompaniment the former Lemonheads singer made his way through the best of everything he’s ever done. For someone who looks like he’s on another planet far far away, his voice was just perfect and it’s impossible to not love him.

From midnight Concorde 2’s late night setlist included Peter Bjorn And John. Forever associated with their Young Folks superhit, they prove to be more than just one song wonders, pulling out a succession of catchy pop tunes. Full of vigour and drenched in sweat they perform well, and when Young Folks kicks in, those of us who loved it once upon a time are reminded exactly why.

After the earlier succession of loud guitar-based rock bands, the synthesized disco pop tunes of We Have Band turned out to be a welcome respite. The Manchester trio are a curious vision, with a male Grace Jones look-a-like bare-handedly banging on his drum to the point of knocking it over, a Lady Sovereign look-a-like not doing too much apart from occasionally stabbing a keyboard with a single finger. The gig kicked off brilliantly, but 20 minutes in and the novelty had worn thin.

Datarock marked the end of the night. This Norwegian band knows how to put on a spectacle, and employing matching outfits (much of which comes off by the end of their set) they clearly wanted those of us left straggling involved. Inevitably Fa-Fa-Fa is the highlight, but the energetic and loud dance-punk makes its mark. By the time they call it a night, it was 2.30am and time, at least for some of us, to turn in.