by Jenni Cole
published: 27 May 2012 in Live Music Reviews
Tweet 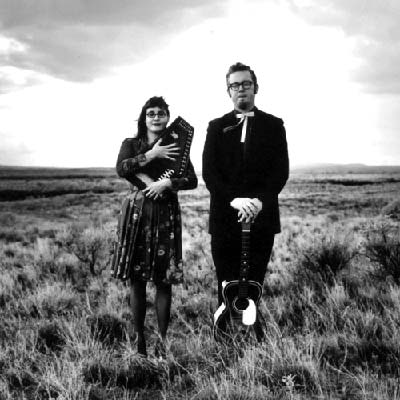 Some bands can do banter with the audience, some can’t. Few do it anywhere near as well as the Handsome Family’s Rennie Sparks, whose idea of reassurance is to tell her crowd, “at least you’re not surrounded by dead ponies having failed to reach the North Pole”. Conventional it’s not, but the Handsome Family is not a conventional band. They are instead a beguiling mix of country traditions and insane imagery more suited to a movie collaboration by Tim Burton and Wes Anderson. Imagine what might have been the result if the Carter-Cash children had been locked in an attic and brought up on the back catalogue of Nick Cave alone.

Brilliant? Of course it is, and the fact that their lyrics are inspired by a love of disaster survivors’ autobiographies (the inspiration for the dead ponies anecdote), evil octopuses, recycling men and cabbage soup only makes them more brilliant. An intimate venue like the 100 Club suits them perfectly, allowing the close contact with the audience they’re so good at, reminding every single one of the select crowd that they are privileged members of a very exclusive club: those that ‘get’ Rennie and Brett Sparks in a way the mainstream still doesn’t.

Their most recently released eighth studio album, Honey Moon (2009), was a collection of love songs written to celebrate their twentieth wedding anniversary, but the new material is less in evidence tonight than might have been expected. They use the occasion as much as a showcase and celebration of their lives/careers – perhaps fittingly – than a chance to showcase the new. It matters not a jot that such a ‘celebration’ begins with Weightless Again (lyrics: “This is why people OD on pills/And jump from the Golden Gate Bridge”), proceeds through So Much Wine (“But when you fell asleep/With blood on your teeth/I got in my car and drove away”) and drags in tales of railroad deaths, protagonists committed to state asylums, suicide by starvation and sad milkmen along the way.

It’s a fitting way to share the twenty years of their fruitful collaboration, with enough new material dotted amongst the old favourites to make this more than just a greatest hits set (though perhaps not quite enough to make them seem sufficiently proud of it). The audience is a surprising mix of ages and tribes, as impossible to categorise as the band itself, but there’s a definite sense that they’ve seen the happy couple many a time before and are back in the company of old friends. This is never more true when Brett asks the audience to choose the content of the encore: he refuses the request of The Woman Downstairs on the grounds that “We’ve already played it tonight!” only to be informed that they haven’t, sparking the reply, “Since the age of 25 it’s just been a fucking blur…”

The banter between this unique husband and wife team, between the band and the audience, and between audience members themselves proves one thing: the Handsome Family has extended itself far past those playing instruments onstage. They’ve created a dedicated and loyal fanbase who are more than happy to stand in the baking heat of an Oxford Street basement on the hottest day of the year listening to songs about falling in fires drunk and the untimely deaths of Antarctic explorers. How many other bands could pull this off?

The Handsome Family MP3s or CDs

The Handsome Family on Spotify