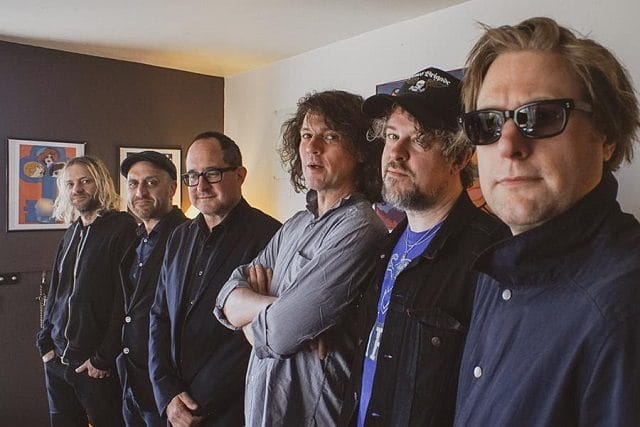 The Hold Steady are one of those bands whose popularity is beyond ‘cult’, but inspires the sort of passion those artists court. The setting for tonight’s show is an example in hand.

It’s a sell out – the second of three sell-outs – as part of their now annual residency in London. The concept for The Weekender (a nod to their track of almost the same name, from fifth album Heaven Is Whenever) started off as a series of gigs in their native New York. It was such a hit that last year they brought it to London, with two shows here, at The Electric Ballroom, and a more intimate gig – with a Sunday lunch thrown in (!) – at The Lexington.

Those dates marked the 10th day anniversary of Stay Positive, the album that sealed their reputation in the UK. This year, there’s no roast potatoes, instead the Sunday evening show is at Oslo, with a Q&A and screening of their 2009 documentary, A Positive Rage, at the nearby Picturehouse beforehand. But tonight they’re just enjoying themselves.

This middle show delivers everything you’d expect and want from a Hold Steady show. From the very beginning, with Stuck Between Stations, the massive choruses create a campfire type atmosphere, with the audience singing along, arms slung over friends’ shoulders. In a hefty, 25-track set, huge songs like Chips Ahoy!, Massive Nights, Party Pit and Sequestered In Memphis spark a communal grin that reaches every corner of the packed room. It is impossible not to enjoy a Hold Steady show.

The Hold Steady are an easy band to fall in love with. Devotees hold dear their kitchen sink narratives and intimately crafted stories told with bombastic flare and raging guitars. Singer Craig Finn is an absorbing frontman; he’s animated, constantly opening his arms towards the audience, as though scooping the whole room up in a hug, while Franz Nicolay hammers the keyboard with a mania that you cannot tear your eyes away from. They’re a sort of metropolitan elite Springsteen.

Amongst the fan favourites, pulled from right across their six album back catalogue, a new track, Denver Haircut, is given its debut (“we’ve not played this to anyone yet!”) – a perhaps more composed approach, but still with the playful vocals that are the band’s trademark, it bodes well for that long anticipated next album.

Before they leave the stage, Finn leads a chant of “We are all The Hold Steady” – cementing the communal, party feel of the night. And looking at the audience, who very much mirror those on stage – and tonight’s support band, white, Canadian males PKEW PKEW PKEW – it looks like a valid statement. But of course we’re not all The Hold Steady. Given the shockwaves rippling through rock music at the moment, in a room full of white, male rock fans, it would’ve been a really great move to open up the platform a support slot offers to someone who looks a bit less like The Hold Steady and 90% of tonight’s crowd. Small steps like this – opening up the party – could be really powerful.

It looks like there’ll be an opportunity to address this next year, because this gig set-up – short, hard bursts – clearly works for the band, with Finn already promising to come back for more of the same in 2020. And for tonight’s audience, it’ll undoubtedly already be in the diary because, to paraphrase the band, there is so much joy here tonight.