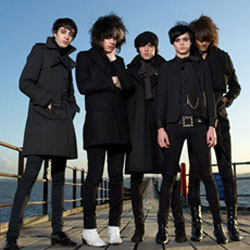 I looked, concerned I’d accidently trodden on her. But I hadn’t.

“Eeeeeeeeeiiiiiiiiiiii! OH MY GOD!”, she continued. “He’s so fit. I fancy him sooooo much. Don’t you fancy him?!”

Nonplussed, I gestured towards the five figures, spluttering the only question I could think ofat the time: “Which one?”

Did I think he was fit? It’s not something I’d ever considered. Confused, I stared at her. Butbefore I could voice my confusion, it was too late. She was gone. Like Keyser Soze.Like Lord Lucan. Like something else fleeting and elemental. Darting into the heaving mass ahead,determined to get closer to the object of her affection.

It was troubling. Because she had raised the consideration in my mind. Maybe theoutpouring of critical love the band have recently received hasn’t been driven by anything likethe quality of the new album. Maybe, just maybe, the entire British music press all just thinkbassist Rhys ‘Spider’ Webb is really fit.

Anyway, the other thing it made you wonder was that after being told that The Horrors had becomeMy (Neu!) Bloody Valentine, 15 minutes stood in the Electric Ballroom would suggest thatthey’ve become The Monkees.

No? The screaming female fans. The bowl haircuts. The (sartorial) common threads. The secondalbum produced by Portishead‘s Geoff Barrow… Ah. Well. You know. It would have been, had MickyDolenz had his way.

It was (unsurprisingly) Primary Colours which dominated most of tonight’s performance. A sub-10minute three song encore was as near as we got to the first record, but where normally it’s theapologetic respite, the thanks for coming, here’s the songs you actually wanted to hear, tonightthe encore was served up as a demonstration of quite how far they’ve come.

Sheena Is A Parasite and Count In Fives are still brutally effective blasts of garage punkintensity, but they lack the control and the ambition The Horrors now ably demonstrate.

I Can’t Control Myself grindingly re-appropriates the heart and soul of Spiritualized‘sCome Together in stunning fashion. Mirror’s Image elegantly projects itself between Tom Cowan’sgraceful synthesizer runs, Joshua Third’s wall o’feedback guitar and Webb’s throbbing basslinelike the unholy union ‘twixt Depeche Mode and Interpol, while the astonishing,perpetual motion of the interconnected sequenced runs that make up the epic Sea Within A Sea wereterrific.

All the time Faris Badwan conducts his masses. Gothic, barely understandable and slightly frightening,he’s a totemic presence at the front of the stage – even dressed in a t-shirt so large it lookedsuspiciously like he’d borrowed it from Robert Smith, and that they could, if necessary, get allfour of the other members in it alongside him.

Impressive stuff from a band who aren’t getting much wrong at the moment. And Spider? He’s a goodlooking chap. Just not my type.