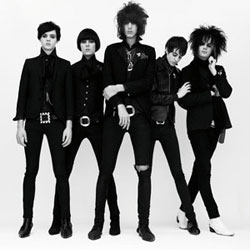 It seems that history could well be about to repeat itself for The Horrors. Two years ago they surprised virtually everyone by ditching the garage rock of Strange House for the krautrock of their critically-acclaimed sophomore effort, Primary Colours. It quashed any grumblings that they were merely a ‘panto band’ doomed for failure; a Mercury Prize nomination among other plaudits followed. Following front man Faris Badwan’s Cat’s Eyes side project, and with the release of their hotly-anticipated third record Skying due in July, tonight’s gig is the capital’s first chance to hear the new material.

York Hall is not usually a place of gigs but rather a leisure centre and renowned boxing venue. The slightly old-school gymnasium feel suits them. As they arrive onstage, dressed in their trademark all-black attire, their silhouettes are eerily reflected onto the wall behind them. The effect lasts for mere moments before they launch straight into their first new song of the evening.

Opener Changing The Rain is one of six tracks from Skying wheeled out. They don’t collectively signal as dramatic change in sound as their past transformation, though it is less upfront and aggressive; a little looser in arrangement, with more clarity contrasting with the ‘wall of sound’ effect they heavily favoured in 2009. Both that song in particular and Dive In, complete with hypnotic guitar arpeggio, reflect this best, as does the psychedelic Still Life, the first single from the new LP.

As promising as all of that was, it’s the Primary Colours material that really gets the enthusiastic Friday night crowd excited. All the strongest cuts – Three Decades, a piercing Scarlet Fields and Mirror’s Image – get a highly favourable response but Sea Within A Sea remains both a fan favourite and, when compared with the teasers of their future, the best eight minutes in their back catalogue. Enough has been said in the past about its rise-and-fall arrangements and its powerful finale, but on this occasion it is particularly spellbinding. But in its new setlist position, it also has the unfortunate effect of making anything that follows a little tame in comparison.

One aspect of the evening is less than glorious; the Southend quintet’s stage presence is pretty basic at best, with just a few ‘thank you’s and a couple of farewell waves. No amount of strobe lights can hide this. It’s probably unrealistic to expect Faris Badwan to start cracking jokes or interacting with a crowd; that would surely cramp their style. Yet at the same time you’re still left with the feeling that it almost felt like a routine performance for them, even if their musicianship is the tightest it’s ever been.

That said, the novelty of seeing The Horrors in a leisure centre makes for an enjoyable experience, especially when you consider that they’re building up a rock-solid collection of songs. New and old tunes mix together seamlessly and, providing that Badwan is able to unleash his inner frontman at some point in the future, The Horrors show every sign of continuing to be a near-unstoppable force to be reckoned with.

The Horrors played: Changing The Rain, Scarlet Fields, I Can See Through You, Dive In, Three Decades, Who Can Say, Endless Blue, Sea Within A Sea, Still Life. Encore: Mirror’s Image, Moving Further Away.