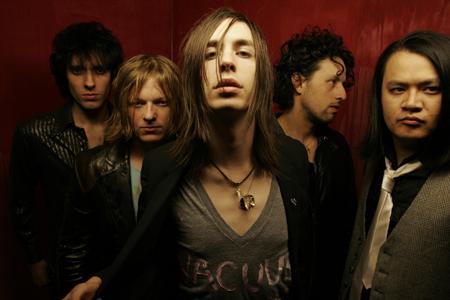 The lock in the toilet of the Lexington doesn’t work.

It doesn’t. There’s no bar. Just the knob you turn that should cause the bar to slide across. If it was there. Which it isn’t. If you aren’t careful you can end up there for hours and hours, spinning the knob aimlessly, awaiting the satisfying clunk and the warm reassurance of a door well closed.

The Icarus Line have been around for a while. A long while. So they’ve presumably got a whole host of boring vignettes which could be potentially wheeled out at this point to count as context for what happened tonight.

But should they be? Are they important to what happened tonight? Is the fact that the toilet of the Lexington has no working lock important to what happened tonight? Or is it all just history, meaningless addendae? Water endlessly passing underneath bridges. Sand unstoppably filtering through hour glasses. Days perpetually sliding through clasping hands.

Context? Fucking schmontext. What happened tonight was a great show. A great rock ‘n’ roll show. Sleazy, poisonous, dirty, dangerous. Rock ‘n’ roll, in the way that it should mean when you say it.

Sneer all you want. You weren’t there. You didn’t see Joe Cardamone and his gang piss all over the clichés that now threaten to overcome the description of the event.

From the strutting opening of King Baby (from new album, Wildlife) to the singular simplicity of the single song encore, The Icarus Line tore and thrust their way across the minds of the enclosed masses.

It was Iggy & The Stooges back when David Bowie was pushing everything up to 11. It was Jim and William Reid literally turning their backs on the audience. It was the MC5 machine-gunning their way through the naysayers and the non-believers.

Cardamone, briefly clad in suit jacket, and then entirely topless, has the sinewy physique of a man who lives the life he portrays, and the charisma to elevate this to the sort of event that leaves you longing for more.

Since their conception in 1998, The Icarus Line have been a lot of things. They’ve been long forgotten, oft ignored, occasionally feted. But now they’re back, and they’re just fucking great.

So honestly, who gives a shit if the lock doesn’t work.