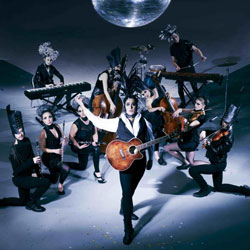 If you’re going to showcase your debut album on Valentine’s Day, you may as well throw caution to the wind and make a night of it.

The Irrepressibles’ singer and songwriter Jamie McDermott decided this was just the thing to do. For his St Valentine’s Day Massacre, at least half of Vauxhall had made the short hop downriver to Waterloo, taking up supporting positions for London 2010’s answer to Weimar Berlin.

Strikingly attired cabaret acts Johnny Woo, Ryan Styles and Dusty Limits took to the foyer’s stage to entertain observers; couples canoodled and fashionistas flounced to support slots either side of the headline act from bands Hooligan Night and Toy Toy.

Principal supports Bourgeois & Maurice owned the main hall for their 30 minutes of fame, Bourgeois George’s lithe frame camping it up all over the room in an assortment of startling costumes, one of which pitched him obliquely at the Spiderman-as-gimp fetish market, while Maurice Maurice tinkled her ivories. With sharply observed lyrics so up to date as to sound written that very morning, they went beyond cabaret into the realms of pathos, performing all of it with irresistible verve. Roping in a spot of improvisation further fueled the freshness factor.

But of course it was chiefly McDermott and his nine performing musicians whom the audience had pitched up at the South Bank to see. Silence descended with the house lights as the stage revealed itself; backed by mirrored panels, it sported back centre a small podium behind a gauze screen. From it, vertical pairs of flourescent lights led to the lip of the stage as if in imitation of a runway.

Arrayed symmetrically in front of the mirrors, the musicians fanned out either side of McDermott, mysterious behind his gauze, and coupled synchronised movements to playing. Festooned in feathery finery of flirtatious flamboyance, their motions acted as emotional chorus to McDermott’s towering, deliberately static presence. Oboe, clarinet, violin, cello and double bass played off keyboards and percussion, conjuring moments fleetingly enchanting.

When he emerged from behind his screen McDermott revealed his own Tina-Turner-in-Thunderdome get-up; triangular hair topped an outfit of Big Bird inspiration. This exotic creature’s only instrumental duty was acoustic guitar, but it is McDermott’s voice that anchors the visual and musical flights of fancy – indeed the whole Irrepressibles project – that make this band the clear descendents of Ziggy Stardust-era David Bowie and the ’70s glam aesthetic he sought to typify.

Compared in delivery with Antony‘s range but meriting comparison too with Tim Curry’s Frank’n’Furter and Alison Moyet‘s more sonorous moments, in a live setting his voice is a transforming instrument, as much a mood generator as it is a conveyor of lyrics. Trained and confident, it soars, trills and soothes.

McDermott’s ear for melody suffers not a jot in amongst the visual exotica and elaborate arrangements; In This Shirt is at its core the kind of brain-invading hymn-anthem Coldplay have sold to the world so successfully, though the lyrics are intensely personal and the arrangement reminiscent of Michael Nyman‘s staccato strings affairs. My Witness and My Friend Jo, by contrast, are big, bombastic Baroque statements, masterfully arranged for maximum drama.

With a show relying on so many individuals doing their job perfectly at just the right moment, there are slip-ups. From my seat one of the backing mirrors reflected only the wooden rear of another, while in a poignant moment McDermott’s guitar suddenly twanged out of tune, requiring a hasty tune-up.

Such quibblettes mattered little. After seeing such an ambitiously dramatic spectacle brought so vividly to life, the memories, musical and visual, stayed with its witnesses long after the last foyer cabaret act had sauntered off back to SW8.