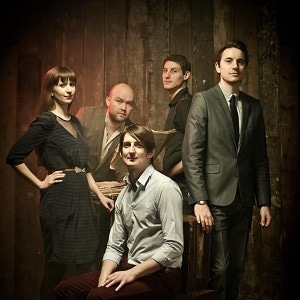 Those who, like this reviewer, are familiar with the largely unremarkable Midlands town of Burton-upon-Trent will be aware that its main contribution to British culture lies in its once world-leading brewing industry, rather than any claims to musical greatness. With the exception of long-forgotten ’70s/’80s singer-songwriter Joe Jackson and – at a push – mediocre shoegazers The Telescopes, Burton has always remained steadfastly bereft of anything resembling an artist of national significance. Until The Leisure Society came along.

Despite describing his home town to a packed Queen Elizabeth Hall as somewhere “there wasn’t very much to do” before performing We Were Wasted, an acoustic lament to a decidedly unsophisticated night out in East Staffordshire’s regional hub, the Bass beer mat proudly attached to his guitar suggests The Leisure Society’s front man Nick Hemming retains a certain affection for his birthplace.

Now based in Brighton, Hemming’s band has just released an excellent third album, All Aboard The Ark, which sees their sound continue its development from quirky folk-rock to something markedly more robust. With a ensemble including a flautist, fiddler and a brass section, The Leisure Society have always had a full, rich sound but the winsome, terribly English pastoral tones of their debut The Sleeper are now being taken in a rockier direction – even to the extent of full-on guitar thrashing on Tearing Down The Arches, one of several songs from All Aboard The Ark to feature in tonight’s set.

Even though they were nominated for an Ivor Novello songwriting award and count Guy Garvey, Ray Davies and fellow Burtonians Shane Meadows and Paddy Considine among their supporters, The Leisure Society remain a well-kept secret beyond a diehard established following. But hearing the newfound immediacy of tracks like Another Sunday Psalm and The Sober Scent of Paper, it’s hard to see why fans of Noah And The Whale or even (dare one say it) Mumford And Sons wouldn’t lap up the exuberantly rustic, effortlessly flowing melodies Hemming and his cohorts are capable of offering up.

That said, it’s hard to imagine Hemming hooking up with a Hollywood starlet like Carey Mulligan any time soon, his slight resemblance to ex-Doctor Who David Tennant notwithstanding. He remains refreshingly normal; engaging willingly with the audience yet with an understated shyness that suggests he almost can’t believe he’s performing in such a major venue. It’s only at the end of the night, when he invites the crowd to move to the front for an encore of The Sleeper favourite A Matter Of Time, that proceedings ramp up to something resembling a big gig atmosphere.

For all the accessibility of their latest compositions, The Leisure Society have still to better the utterly timeless, fragile beauty of Last Of The Melting Snow, subject of the aforementioned Ivor Novello nomination and perhaps the best song Nick Drake never wrote. Appearing early on here, it reduces the onlookers to a state of hushed reverence, and even if Burton-upon-Trent’s new musical saviours never make the major breakthrough they’re capable of, these three and a half minutes alone is a worthy legacy.