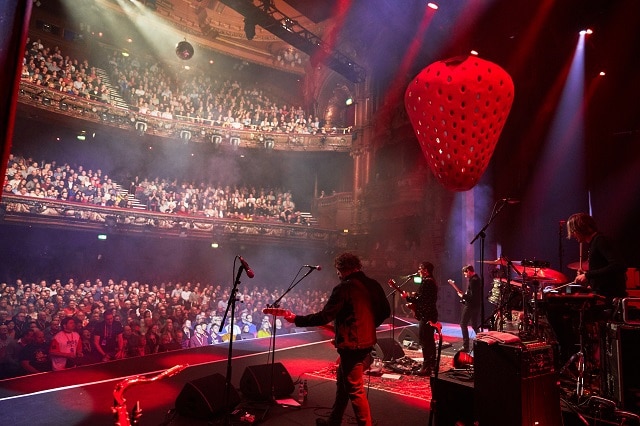 The Lightning Seeds playing Jollification at the London Palladium

“It’s like playing in your front room!” exclaims Ian Broudie, looking out over the London Palladium stalls. “A pretty big front room though”, he laughs.

Stood under a giant strawberry, The Lightning Seeds front man clearly feels at home. He and a newly assembled band are enjoying a trip down memory lane with a performance of Jollification, the first half of their gig. Arguably the band’s strongest album, it celebrates 25 years of existence this year, and its reawakening serves as a poignant reminder on how much life has changed in that time.

It brings vivid recollections for the singer. “I wrote this song about my home city, and the wonderful parks”, he says before a wistful, carefree depiction of Liverpool in twilight on Perfect Day. The first song on the Jollification album, it is placed fifth here, the running order altered to place the big guns towards the end.

This is a minor setback for those who love the continuity of a complete play through, and the opening Marvellous suffers a little from its lower pitch. By contrast Why Why Why comes forward as an airy number with a darker underside to its questioning, and Open Goals and Punch & Judy prove the strength of the ‘fillers’. The latter wobbles on occasion, illustrating how tricky some harmonies from Jollification are when performed live. As Broudie admits, this is the first time some of these songs have been heard with an audience, and it adds to the endearing vulnerability of the music.

Buoyed by the reception to the songs, the band close the first half with triumphant accounts of Change – revealed with unexpectedly funky undercarriage – and a breezy Lucky You. This is sung with gusto by the audience, their seats long since vacated.

The second half provides a reminder of the strength in depth the Lightning Seeds still possess. The wonderful Sense is first up, though loses some of its essence by being frustratingly transposed down a couple of tones. No matter, for this second set sounds like a snapshot of 1990s radio. Ready Or Not and Sugar Coated Iceberg might be cut from similar cloth but they rouse the audience decisively, in contrast to Sweetest Soul Sensations and Byrds cover You Showed Me, which remind us of Broudie’s vulnerable side.

What If… has a meaningful presence, its chorus lyric ‘what if everything you’ve got made you want more’ made increasingly telling to its successive generation. Not that the crowd mind, for the large majority have had their formative years to this music.

Standing on Broudie’s right is his son Riley, about whom The Life Of Riley was written – and he enjoys the gig as much as his dad, mouthing the words while providing subtle guitar flecks to the chorus lines. Bass (Martyn Campbell) and drums (Jim Sharrock) generate more funk than expected, in conjunction with Adele Emmas on keyboards. They give yet more reasons for the crowd to forget their seats and lose themselves in the moment.

The end comes all too soon, a stripped-back cover of Be My Baby before the familiar football crowds sound in the distance. It’s time for Three Lions, minus David Baddiel and Frank Skinner – and now with an extra 22 years of hurt from when it was first heard in Euro ‘96. Maybe one day England will win the world cup and banish that particular part of the chorus – by which time Jollification will no doubt be close to 50 years’ service!

As with everything else tonight though, it hits the spot, showing in the process why The Lightning Seeds deserve their place in British pop’s late 20th century hall of fame. Ian Broudie knows how to spin a three and a half minute musical yarn to perfection, and this exultant celebration of his art is well deserved.

The Lightning Seeds played: Jollification – Marvellous, Open Goals, My Best Day, Why Why Why, Perfect, Telling Tales, Punch And Judy, Feeling Lazy, Change, Lucky You, Hits – Sense, Ready Or Not, What If…, Sweetest Soul Sensations, All I Want, Flaming Sword, You Showed Me, Waiting For Today To Happen, Whole Wide World, Sugar Coated Iceberg, The Life Of Riley, Pure. Encores – Be My Baby, Three Lions

The Lightning Seeds MP3s or CDs

The Lightning Seeds on Spotify