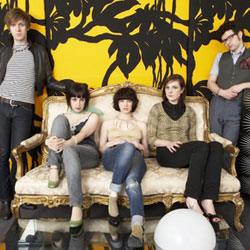 Clwb Ifor Bach has slowly filled in anticipation of the return of The Long Blondes, possibly the coolest British indie breakthrough band of the last few years.

Serge Gainsbourg plays in the background, and a gang of kids on the more outsider edge of indie disco revellers dance in appreciation. It all sets the anticipatory juices flowing nicely. When the band appear to some subtle atmospherica from Emma Chaplin’s keyboard, the place erupts.

Following the keyboard, and the drums and bass lift us up and away. The Long Blondes poppy take on glam-rock is instantly, awesomely seductive. It looks great too, in an essentially underplayed manner. Singer Kate Jackson shimmies to some fine disco flourishes, etched by Chaplin like she means what they say, guitarist Dorian Cox and bassist Reenie Hollis concentrating intensely on their fine and humble licks. It’s the kind of cool you can cut glass with.

The Long Blondes have new album Couples to play, in big chunks. The next track is a thumping echo of the Blondes’ hits, steadily shimmering and just threatening to steal hearts and never give them back, and the third song rocks it some more in that quintessential Long Blondes style that seems to take the best parts of Blondie and Elastica and mould them into sumptuous new shapes.

Next they unleash a ballad. They’d just done glam and disco with utter compulsion, but this has its head a little too far in the ’80s, and it’s the slightly tainted ’80s of Human League rather than the sparkling one of The Church Grims.

Acknowledging the polite applause, they mention some more about the new album when really they should be hitting us with some more action. They shouldn’t be stopping now after the start they made, not even to breathe. A middling track comes next and they begin to look like a facsimile of what they were 10 minutes ago. But we’re waiting for them to subtly explode agian, and just know it’s going to happen.

They keep threatening. Tommy Boy, again, has that electric prime-Elastica stutter. The next track has an awesome drum beat mingling with an epic guitar, but it ploughs too linear a furrow to steal hearts. Another burst of the slightly needless and time-consuming with a thank you and another mention of the new album follows, but the “next single” is worth the wait for sure; hooked on a reggaeish guitar groove that Jackson threads with some of her finest droolworthy vocals.

By now Jackson is completely immersed in her shimmering world. Her vocals attain the swagger of prime Debbie Harry, and are sung tenderly. Giddy Stratospheres flies, and all the Blondes’ stars collide in a sultry style. The crowd sway, somewhat transfixed.

Then it’s all over. Maybe the Blondes’ timing is a little bit out tonight, but no Weekend Without Make-Up? No Seperated by Motorways? Somewhat stunned, the crowd file out of Clwb Ifor Bach like they’ve been ejected from lovers’ beds in the early hours, which is not how anyone thought it was going to end.

The Long Blondes MP3s or CDs

The Long Blondes on Spotify