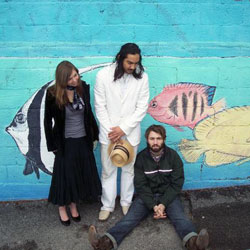 The Deaf Institute’s stage, with its garish red curtains and surrounding floral wallpapers, looks like an enlarged puppet theatre. To the left, a few lucky punters peer imperiously from their lofted position on a balcony. An improbable wall of speakers stands stacked like an about-to-end game of Tetris.

An enormous mirror ball bounces shards of purple light around the space, providing the only source of light aside from some modest stage illumination. It’s a small space, but with a definite sense of character; and there’s something very enjoyable about standing at the back of a show and feeling quite near the front.

And as it happens, The Deaf Institute is the ideal venue for The Low Anthem. The Rhode Island trio played at Glastonbury. Blissfully beautiful songs like Charlie Darwin and To Ohio couldn’t really ask for a better setting, but they found themselves playing tracks from their newly-released album to 20,000 or so uninitiated and slightly disinterested people. Happily, it’s almost the opposite scenario tonight, as an attentive, fully clued-up audience of less than 300 soaks up every note from an album they’ve clearly lived with and loved.

Seeing The Low Anthem in the flesh and at such close quarters is revelatory. On the live stage, Oh My God, Charlie Darwin – an obvious highlight in what has been a quiet year for album releases in more senses than one – blossoms into something far more emotive, adding more credence to the notion that quieter music (well, it wasn’t all quiet) can hit just as hard as its louder brethren. But this isn’t a night to simply appreciate an album.

The intimacy of the venue and the nature of the performance speaks more about the members of the band. Yes, they’re irritatingly gifted in a way that very few in this crowd will be able to relate to, but by the end of the show, The Low Anthem feel like the best kind of human beings, the kind that would really like to share their stories and passions, but refuse to be the loudest voice in the bar in order to do so.

And it is this premise of quiet, unassuming generosity that bleeds from every note of Oh My God, Charlie Darwin. So too do so many of the recent and not-so-recent phases of America music history. Listening at first hand to tracks as wildly different as the soft American James Taylor-folk of To Ohio, the rambunctious Dylan-goes-electric skiffle of The Horizon Is A Beltway, the somnolent Springsteen ballad-rock of Cage The Songbird and the Ryan Adams-influenced neo-Americana of Champion Angel is a rich experience, like visually time lining so many of the cornerstones of American traditionalism.

A sound as respectful to tradition and yet so remarkably heterogeneous requires musicians with talent, that’s pretty obvious. But the way the three members of the band seem to interchange instruments at will, as though they are contemplating which one to play next during each flawless rendition, is impressive. As is the range of instrumentation, and the way that everything from a harmonica and a double bass to a whistling mobile phone (apparently, American cell phones are better at whistling) can subtly bring character to the music.

Even something as commonplace as a Fender Stratocaster, with its rough-edged bluesy jangle, feels underused and thus more appreciated. That said, it is Ben Knox Miller’s vocal dexterity that steals the limelight. Whether it be Beach Boys-esque falsettos or the throaty wails of later Bob Dylan, Miller seems completely unfazed.

Judging by Miller’s amusing anecdotes about disastrous early touring efforts, it has been a long and hard road for the founding members of the band. Hopefully, special nights like this should make it all seem worthwhile.