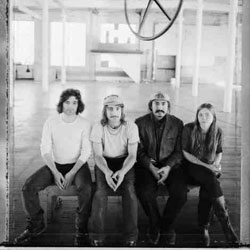 Americana has become an increasingly crowded marketplace over the last ten years or so, with more and more bands trying to tap into mythic folklore and an undeniably potent songwriting tradition. More positively, it is also a musical area where slow building word of mouth success has been the primary means of breaking a band. The Bella Union label seems to have shrewdly picked the best of the current bunch, with the imminently returning Fleet Foxes and the much admired Low Anthem. This final show on the latter’s European tour proved to be a complete delight, although for somewhat unexpected reasons.

First, support act The Head And The Heart demonstrated how difficult it is to stand out in this area. Not even the occasional bit of cutesy hand clapping and dancing could raise their game. In fairness, there were some good songs here desperately trying to break out, but they were mostly stifled by frustratingly unmusical execution, particularly from the leaden rhythm section. Most of the songs featured pounding drums at an extreme volume, beating the life out of the material. There’s more heart than head in this music for sure, but the group appear to have confused volume with intensity. The finest moments were when drums dropped out completely, allowing the group’s front line harmonies some space to communicate. In order to play this sort of music, with its intentionally limited harmonic and melodic palette, it is vital either to write exceptional songs, or to have a distinctive mode of delivery.

Fortunately, The Low Anthem are more than capable of doing both. Few gigs come with quite this dazzling an array of instruments – from clarinets and pump organs to bowed percussion, saws, an upright bass and a drum kit with a huge, old fashioned bass drum. From this, it’s immediately clear that The Low Anthem are no ordinary modern country group. Much of this music also has a hymnal, contemplative quality that makes The Low Anthem a uniquely mature and compelling group.

Few gigs begin this quietly. For the first few songs, it is calm enough to hear what vocalist Ben Knox Miller refers to as ‘the fake shutter sound’ on the cameras immediately in front of the stage. It is a quiet confidence, however, rather than a sign of vulnerability. Here is a band with a courageous, admirable belief that nuanced, fragile music can resonate with large audiences. They begin gathered tightly around a single old school microphone, delivering the haunting reverie of Ghost Woman Blues from the new album Smart Flesh. It’s an alarming start to proceedings – but the band sustain this kind of ghostly, melancholy mood for most of the set

The generous set offers judicious selections from their three albums so far, including a desolate, mournful TIcket Taker, a stark and impressive Smart Flesh and a desperately sad rendition of This Goddamn House. The latter concludes with a surprisingly moving chorus of audience members’ mobile ringtones. There is plenty of instrument swapping, with Jeff Prystowsky moving between bass and drums and Jocie Adams proving adept at moving between clarinet, trumpet and percussion. Much of this seems to be done on the fly, with the band convening for brief discussions between songs.

The sense of improvisation and invention is brought into sharper relief by some peculiar crackles and bangs during the otherwise beautifully still To The Ghosts Who Write History Books. These technical problems force the group to abandon the stage for ten minutes while a solution is found. With admirable quick wittedness, the band leave the stage, not for an unexpected break, but to march out into the centre of the auditorium with instruments in hand, to perform a few songs within the audience, sans amplification. This wonderful moment not only demonstrates the group’s skills with close vocal harmony and their knowledge of the American folk canon, it also shows their close relationship with their audience and willingness to adapt to difficult situations. ‘It’s nice to be reminded that the big stage, the lights and the sound are all bullshit’, said Knox Miller. ‘We’re still at the local bar’. Lesser bands would have thrown hissyfits and stormed off stage.

Yet The Low Anthem, so confident with the space, silences and slow moving lines in their songs, still seem a slightly schizophrenic band. Perhaps from a thought that a whole set of such bleak material might be too much for any audience, they periodically burst into full throttle, stomping electric rockers. Boeing 737 and Hey, All You Hippies! are the most recent examples of this – ragged and slightly clumsy, whilst Home I’ll Never Be sounds like Tom Waits fronting Mumford and Sons (it is, in fairness, a Tom Waits song). For sure, some contrast and balance in their music is probably a requirement, but they need to find a way of delivering these intense blasts of electric energy with some of the consideration and finesse that characterises their best songs.

They end as they began, gathered together around one microphone, with a startling Charlie Darwin (Knox Miller at last showcasing that striking, affecting falsetto) and a faithful but intense take on Leonard Cohen’s Bird On A Wire. Cohen has clearly been a major influence on Knox MIller, and both his sadness and compassion inform his writing. For sheer instrumental creativity (bowed banjo, anyone?) and triumph in the face of adversity, this may be one of the gigs of the year.