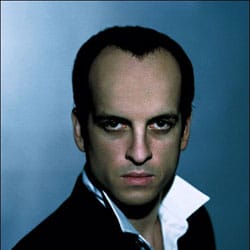 The British Council’s 75th anniversary was celebrated in exuberant style tonight, in a two-part concert headlined by the The Matthew Herbert Big Band.

The evening highlighted the work of the Council’s Music Department, which works with artists from the UK and internationally to improve cultural relations and break down barriers.

Herbert has worked extensively with the British Council in the past, and recalled playing with the Big Band in Syria, shortly after George W Bush had declared it to be part of the Axis of Evil in 2002.

Performing in a country with limits on free speech posed some challenges – in particular when performing Simple Mind, which uses the sound of tearing newspaper.

Ripping up any of the state-owned newspapers wouldn’thave gone down terribly well with the authorities, so they took copies of the Daily Mail over with them instead. As Herbert noted: “The Mail was more useful to me as a musical instrument than a newspaper. It can help make the world a better place by being torn up.”

It certainly went down well with the sell-out audience at the Barbican, who booed and hissed when the newspaper’s name was mentioned – and the ensuing destruction brought to mind a scene from Dead Poets Society, where Robin Williams enthusiastically shouts “I don’t hear enough RIP!” to his students.

A paper fight ensued between various sections of the band, and the trumpet section seemed to bear the brunt of the attacks. Eska, the singer with whom Herbert has collaborated extensively, also got in on the act and ended up with shredded newspaper pom-poms. Her dress was particularly striking, and took shoulder pads and accentuated hips to new heights.

The three collaborations which opened the evening were slightly lessdaring in their choice of attire, but showcased a broad spectrum of musical styles. The links between the blues and West African music were highlighted when Justin Adams and riti player Juldeh Camara were joined on stage by ngoni maestro Bassekou Kouyate, his Malian compatriot Amy Sacko, Egyptian Mohamed Medhat‘s violin and a drummer called Martyn from glamorous… Ellesmere Port.

There was a hint of Sinead O’Connor in the duetof Palestinian vocalist Kamilya Jubran and Scots singer-songwriter Karine Polwart, who sang a poem in Arabic and a response in Gaelic. Guillemots vs Penguins rounded things off, and performed the Penguin Cafe Orchestra song Telephone And Rubber Band, with some added guitar oomph from the wonderfully named Fyfe Dangerfield, a man in need of a decent haircut.

When Herbert took to the stage, he was wearing his usual morning tails and sported an oversized bow-tie, but was bereft of a top hat. It gave him a slightly Lurch-like appearence, and coupled with his impressively uncoordinated dancing, made for quite a sight. As well astouring to promote the 2008 album There’s Me And There’s You, he’s bossed Accidental Records and produced albums for The Invisible and Micachu this year.

Bold political statements were never far away during the course ofthe evening, and during Battery we saw Herbert and the 75-strong Goldsmiths Vocal Ensemble cover their heads with hoods, in reference toBush’s War On Terror and the infringements on civil liberties it heralded.

References to Iraq could be found during One Life, where he contrasted the NHS having spent 250,000 keeping his son alive – who was born two months premature – with the amount spent and resulting number of deaths since the removal of Saddam Hussein.

There was a return to levity with a great encore in the form of The Audience, from 2001’s Bodily Functions. Herbert got the crowd to sing the note D and sampled it, and the choir proceeded to get into the rhythm and dance away merrily, which was fun to watch.

It was an effective ending which saw the choir dance out of the auditorium through the crowd, leaving the charismatic Zimbabwe-born diva Eska to sing the last lines, and then leave the stage carefully in her oversized heels. This evening was another great performance by Herbert’s ensemble, and a testament to the power of collaboration, something the British Council has done so much to promote.