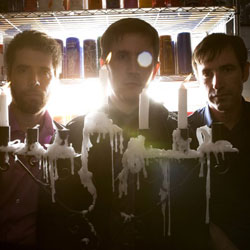 Nineteen years and 16 albums into a career that’s slowly evolved from ultra low-fi americana (recording EPs on a boombox) to a certain level of major label polish, John Darnielle’s The Mountain Goats could be forgiven for kicking back and resting on his not-inconsiderable laurels. Yet, as he approaches his third decade as a performer, all the signs point to a creative purple patch – a well received new record and his biggest London headline date are proof that there’s still life in the old billy yet.

Hailed by a handful of influential critics as America’s greatest living lyricist, Darnielle’s incredible workrate has produced fascinating records dealing with substance abuse, song cycles about a couple disintegrating under the strains of alcoholism, achingly painful breakups, talking animals and more religious iconography than you could shake a staff at. Yet, if all that sounds a little depressing (and, at times, it’s pretty bloody depressing),Darnielle has an incredible ability to retain a light of hope in his music – many of the most painful songs he’s written are actually set to the catchiest tunes – and sets him apart from many of his check-shirted contemporaries.

On the surface, London’s KOKO seems an odd choice for his tender, confessional songs. You’d rather expect to be sobbing in the aisles of the Union Chapel, particularly as his new record, the relatively upbeat The Life Of The World To Come, takes all its titles, and much of its lyrical content, from Bible verses. Yet it soon becomes apparent that The Mountain Goats are a very different beast live than they are on record. Perhaps the first signs of something a little special is the crowd – it’s enormous, drunk and predominantly young and attractive. We had been expecting beards and plaid; we seem to be getting geek chic.

Dressed preppily in suits, Darnielle and his group (bassist Peter Hughes and drummer Jon Wurster) come onstage to a burst of totally incongruous heavy rock music, before turning in a pumped up version of new album opener 1 Samuel 15:23 – about a faith healing charlatan – with spite, vigour and even the hints of a drum solo. As a way of deconstructing their own myth, and setting the tone for a hugely entertaining show, it’s brilliant. The audience go ballistic. Darnielle looks delighted. This wasn’t what we were expecting at all.

And so it continues. For a glorious hour and a half, including three encores, moshing and even, during set highlight The Best Ever Death Metal Band In Denton, a mass explosion of devil horns, The Mountain Goats make misery sound like the most fun you can have in Camden outside those vague hallucinogens you used to be able to buy in the market. Darnielle, with over 400 songs in his repertoire, chooses well, bookending the gig with crowd favourites like Cotton and No Children, while dropping in rarities and newer material. The latter inspires a stirring mass singalong – a rapt crowd screaming, as one, “I am drowning… you’re coming down with me/ Hand in unloveable hand/ and I hope you die, I hope we both die”.

Darnielle, a buoyant, funny and endearingly gawky figure throughout, still does a short acoustic set, in which he invites audience members to shout out requests. Of these, even an unreleased b-side called Shower from 2002’s The Coroner’s Gambit seems as fresh as any of the new material on show tonight – a mark of the consistency The Mountain Goats’ work. New work like Deuteronomy 2:10 and Psalms 40:2 are much better than their offputting titles, and even without a Bible to hand to decipher the song meanings, they’re as strong as any of his best-loved work.

After the third encore, the crowd finally let the band go. Despite having a dense and sometimes impenetrable output, Darnielle has fashioned a live show that pleases both devoted fans and newcomers alike. On this showing, it’s more than likely that The Mountain Goats will keep rockingfor another 20 years.